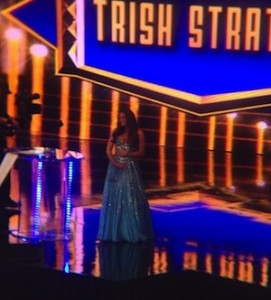 Talk about a bombshell!

During her WWE Hall of Fame induction at Madison Square Garden in New York City tonight, Trish Stratus announced that she is expecting her first child with husband Ron in September.

The newly-minted Hall of Famer married her high school sweetheart in 2006 — just a week after her retirement match.

Speaking to WWE.com after her bombshell announcement, Trish said: “It was awesome. As a public personality, you wonder what’s the right time to tell everybody. Of course, when I got the news I would be inducted this year, I definitely found out I was pregnant, and so I thought, ‘Oh my gosh, I’ll be four months, I should tell them!’

“Me and Stephanie actually talked about it and thought it would be a great chance to announce it. It’s my family out there. They’ve been part of my life for so long, the WWE Universe, and to actually share the news with them was wonderful. And the reaction was nice. They like the Stratus baby!”

Congratulations to Trish and Ron!