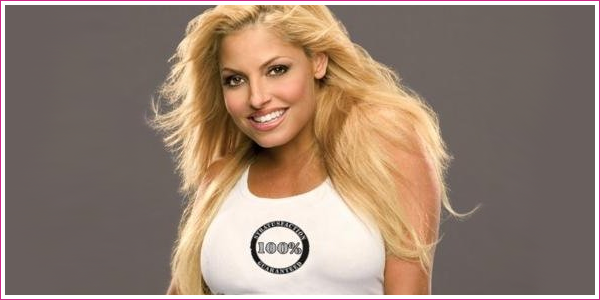 In a focus piece on the lifes and times of one of the great female wrestlers, the Times & Transcript has posted a new interview with Trish Stratus. The legendary 7 time Women’s Champion however, has some criticism for her former employer – calling the current WWE women’s division “disappointing.” Considering some of the stuff we’ve put up with as viewers, who can fault her?

She says the current state of WWE’s women’s division leaves a lot to be desired. Storylines, character development and in-ring action aren’t really the focus.

“It is disappointing,” she says. “I think what it is, they have too many women. And I think they can’t even see who’s who because there’s so many of them. I think they need someone maybe that can focus on the women.”

Trish would like to see WWE realize that they have different personalities and women who can provide different elements to the show. She still chats with current WWE divas and says they are frustrated with the lack of direction their division has.

If WWE can’t listen to it’s audience, surely the greatest Diva in it’s company’s history pointing out the same issues that we have is a glaring insight? I would hope someone, somewhere in the company reads this and maybe they’ll finally see what we see. The fact that Trish boycotted their biggest event is also very telling and I’m really glad she stood her ground, it would’ve been hypocritical for her to appear at WrestleMania and then make these remarks. I admire Trish’s stance, why appear on their show if you don’t believe in their product?

I agree, there are far too many women on the roster right now and it’s unnecessary to have that many girls. I wouldn’t have a problem if they actually used all of their Divas in roles that contributed, but you have girls like the Bella Twins, Eve Torres, Tiffany and Maria to name a few, that just stand on the sidelines and do nothing. And when they are used, they take away television time from Divas that actually are well-rounded and have the potential to get over.

There are currently six Divas on the roster that have the true potential to be top Divas, yet not all of them are given the time and attention they deserve: Beth Phoenix, Gail Kim, Mickie James, Melina, Maryse and Michelle McCool. WWE needs to focus on where their talent is and not on the ‘lesser’ Divas.

However, one of the reasons they have so many women on the roster right now and part of the reason they push so little Divas and throw them out there collectively with 25 Diva battle royals and 18 Diva tag matches, is because of Trish Stratus. There is certainly a correlation between Trish’s departure and this new mass-booking. Since she left, WWE has been reluctant to put the time and effort into pushing a single or even two or three Divas, as their new top Diva(s) and their ‘Trish replacement’. It all boils down to the fact that WWE are not willing to give any of the current women the same opportunities as Trish, even though the likes of Mickie, Melina and Beth deserve it. Hence why instead of pushing one-on-one feuds, we get crappy feuds that involve all of the Divas.