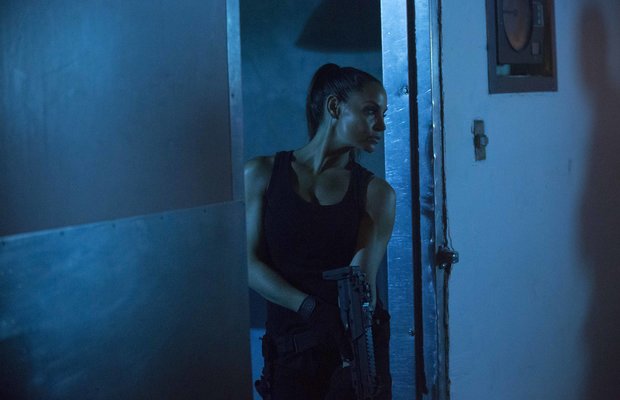 To promote her upcoming film GRIDLOCKED, Trish Stratus and Allan Unger, the writer/director of the movie, along with her co-star Cody Hackman, participated in a Reddit AMA. Questions ranged from her feelings on acting, to what she thinks about the current state of women’s wrestling, her fitness routines, and more.

On how she got into yoga: I started yoga while trying rehabilitate a herniated disk I suffered in the ring. Remember the Viscera storyline? After he ‘squished’ me, I went to repair my back and to avoid surgery, I used yoga and completely rehabilitated it. When i returned I was much better performer as far as agility, flexibility and improved recovery time. I still practice today. Every wrestler should do yoga!

On NXT and WWE’s women’s division now compared to the Attitude Era: I think its comparable as far as the amount of talented women who can deliver in the ring, with more storylines and time being given, they are going to be able to carve out their legacy much in the same way we were able to do.

On her favorite moments in her career: I have a couple: my retirement match due to its perfect setting (hometown crowd, with my bestie and I became 7x champ!). Also my Wrestlemania match with Mickie James was very important for the progress of the women’s division.

On dream movie roles: Well, I’ve had my eye on playing Wonder Woman since I was a kid lol … but Gal Gadot has that locked down – and, I must say, she is looking solid in the role – I def approve! Witchblade and Danger Girl were some of my favorite comics… would be cool to bring either one to life since I know them so well.

On which current Superstar she’d like to face: NATTIE!!!

On other current favorites: I do watch still. Loving Enzo and Big Cass right now.

On how to get motivated to stay in shape: Make a lifestyle so its not something you have to force yourself to do, it is just part of your day to workout, like brushing your teeth (just sweatier). Eating well – can’t beat how much better you feel when you eat well… plus you are what you eat. So what you put in your body makes a huge difference to how you feel and look.

On her favorite video games growing up: Growing up it was Super Mario Bros, Tetris, Donkey Kong, Pac-Man, Sonic … and first being Pong. Here is my list of my all time favs: http://bit.ly/1lSrlUi

On if she’ll ever work in a backstage role with WWE: I have a full-time, mostly off-screen role at the moment that takes up too much time: MOM

On what it was like to main event Raw and who deserves a chance to do so now: Blessed to have been given the opportunity to main event – we worked our ass off for a spot like that! Any of the current females deserve that chance, they too are working their asses off. That’s what we do, just like the males, you do you best work and hope that your work takes you to the top.

On competing in MMA or UFC: When filming my travel show a few years back – I was filming in Thailand and did some Muay Thai training at Fairtex. I had a fight and afterwards I felt like I kind of had the bug to compete. But, once I got back I realized I don’t want to get punched in the face for a living.

On how filming a movie is different from WWE: I would have to say nothing compares to a live arena filled with the WWE Universe!! Shooting a movie is very different, lots of takes, long hours. Sometimes it will take days just for one scene. WWE is like instant gratification. You deliver stratusfaction and the audience explodes. With a movie you sometimes have to wait 2 years before you see that stratusfaction delivered (in this case), however, stratusfaction with sound effects and special angles and a sound track def make up for it! Very different process, and I love both processes!