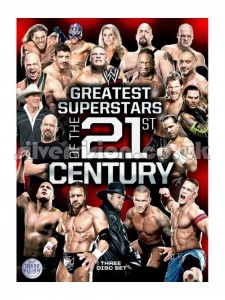 Trish Stratus is featured on the cover of the upcoming WWE DVD release, Greatest Superstars of the 21st Century, which looks at a number of memorable competitors from recent WWE history. Silvervision.co.uk gives us a look at the cover, which you can view in full by clicking the thumbnail.

[notice]”Sure, we’re barely more than 10 percent of the way through the 21st century, but it’s not too early to look at some of the WWE superstars who are rewriting the record books on their way to squared circle immortality. Batista, John Cena, Edge, Chris Jericho, Randy Orton, and Triple H are among the icons profiled in this action-filled compendium.”[/notice]

The DVD will be available in North America on July 26th. You can pre-order both the 3-disc and 2-disc Blu-Ray editions on Amazon.