We’re again bringing you a special edition of Unwrapped, where we cover multi-Diva shoots in a miniaturized version of our regular “unwrappings”, focusing on the looks and ensembles our Divas have put together. This time, we’re taking a look at the “Raw Boxing” photoshoot, where the Divas who took part in Raw’s boxing-themed tag team match show off their Everlast gear. Click here to see the full photoshoot. 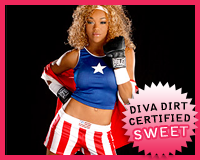 Alicia Fox
Grade: Sweet. I can’t help but think of two things when I see Alicia’s gear: Captain America and the Harlem Globetrotters. Both are a good thing–they’re iconic! The stars and stripes are cute and kitschy enough to catch your eye, but not in a ultra-girly and cheesy way. She kind of looks like she’s set to fight in that old “Mike Tyson Punch-Out!” video game. 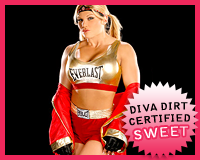 Beth Phoenix
Grade: Sweet. OMG, Beth actually gets to take part in a themed match! Beth doesn’t disappoint, either, actually adhering to the theme and looking more like an actual boxer than any of the other Divas. The gold and red Everlast gear looks sexy, not sleazy, and it doesn’t look like a Halloween costume gone wrong like one I have a feeling I’ll be seeing on a particular Diva still to come.. 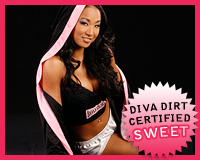 Gail Kim
Grade: Sweet. It’s pretty simple, but the little silver shorts are cute. She also uses pink, but not overwhelmingly like she needed to reinforce the fact that she’s a woman. “I gotta say, though, the “Boxer Girl” on her top looks like it says “Boner Girl” on first glance. Good thing or bad thing? Judge for yourselves.. :P

Follow the cut to see the rest of the Divas in the photoshoot. 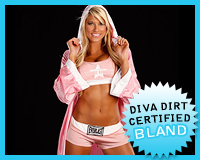 Kelly Kelly
Grade: Bland. Surprise! Kelly wears something puke-inducingly pink! I find it pretty cheesy when someone’s definition of making something feminine is simply drowning it in pink hues. I don’t have anything against the color, really, but it just shows a severe lack of creativity on Kelly’s part. 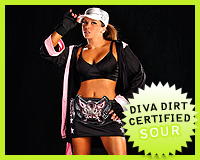 Mickie James
Grade: Sour. At first glance, the look isn’t bad at all. However, if you saw the match on Monday, you’d notice that Mickie didn’t really think the logistics of the outfit all the way through–she was yanking on that skirt the entire match. So much for a PG show–her ass was hanging out 70% of the time. Seriously, it’s short, tight, unflattering, and an all around inconvenience. And honestly, the skirt’s not so cute that the hassle of picking at it the entire match would be anywhere near worth it.. 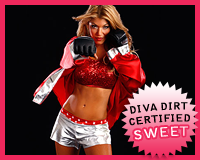 Rosa Mendes
Grade: Sweet. For once, Rosa’s flashy style doesn’t hinder her. The silver and red look great on her, and the ultra-sparkly top has just the right amount of pizazz. Killer pose too, by the way.

Now that you’ve gotten our perspective, which Diva do you think looked best? Vote in the poll below and sing your song in the comments!