Welcome to this week’s edition of Unwrapped! As always, we will be grading all of the new photoshoots (or “eye candy”, as we like to call them) from the week gone by, judging them like so:

You, the reader, will also get the chance to grade the “eye candy” yourself by giving your opinion on each shoot and voting for your favorite out of the whole bunch. Now, dive in! 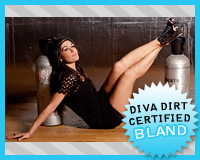 Brie Bella‘s Bottle Shock
Grade: Bland. Boy, the Bellas sure love posing with those tanks, don’t they? Brie is accompanied by those props here, and while she looks great (the shoes and dress are great, though I’m not fond of the headband she always wears), she looks a bit silly posing so seductively against them. It’s kind of like she’s trying to market them as a product using the Carl’s Jr./Paris Hilton marketing method. Expect sales of carbonic acid (which I assume is in there–it says H2O & carbon dioxide) to triple in the next month.
• Click to see the rest of the photoshoot.
[poll id=”488″] 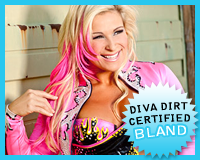 Natalya‘s Up in Flames
Grade: Bland. It’s time for another ring gear shoot from Natalya! While I particularly liked last week’s gear shoot, this one lacks in the pose department, which Natalya even breaking out the duck lips in a few photos (*horror movie scream*). The setting, which we saw in a previous Rosa shoot, is still as cool looking as it was back then, but it just doesn’t gel with what Natalya’s wearing. It’s just not easy to picture her wandering outside in her ring gear and coming across a rustic setting by chance. I just hope Natalya eases back into regular shoots soon-she must be running out of tights!
• Click to see the rest of the photoshoot.
[poll id=”489″] 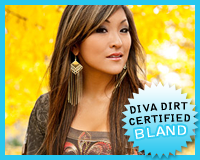 Savannah‘s Golden Sky
Grade: Bland. This shoot is rather simple, with Savannah casually sitting in front of a tree and amongst a pile of fallen leaves. It makes for a pretty setting, with the golden leaves brightening up the scenery and making for some interesting shots. I’m not crazy about her dress–it just doesn’t go well with the scenery, in my opinion. The poses, as they have in most of her photoshoots so far, still look a bit “catalog”-esque–Savannah just needs to develop more of an edge in her photoshoots.
• Click to see the rest of the photoshoot.
[poll id=”490″] 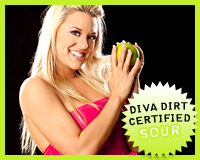 Tiffany‘s Forbidden Fruit
Grade: Sour. I’m not quite sure what’s going on here–why is Tiffany posing with an apple? Is it to evoke the whimsical feelings of old fairy tales? If so, I’m not sure wearing a hot pink mini dress would accomplish that. Her poses do nothing to help it, and they make her look even sillier, holding the apple as if it were some fascinating prop or the Hope Diamond. I’m sure there would be a way to make the inclusion of the apple work, despite its randomness, but she doesn’t accomplish that here. Needless to say, she won’t be rivaling Snow White anytime soon in the “damsels holding apples” category of cuteness. Overall, it’s a bit of an ill-conceived shoot, and I just can’t admire a photoshoot that looks there was about 2 seconds of thought put into it.
• Click to see the rest of the photoshoot.
[poll id=”491″]