Valkyrie III in Review: All Hail the Queen 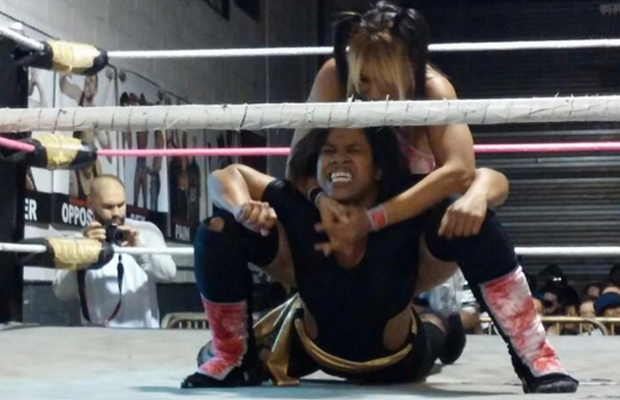 While wrestling promotions on the east coast aren’t hard to find in the least, it’s slim picking once you enter the five boroughs. So finding an all women promotion in the NYC is next to impossible. That’s why it’s so refreshing to see a promotion like Valkyrie running in my hometown of Brooklyn. Valkyrie held their third show Friday night at The Ludus Wrestling School in Sunset Park, crowning their very first champion in the process. While there was a misstep or two, the upstart promotion delivered a solid show, that made me want to become a firm supporter of the company.

The kicked off with “Superstar” Nikki Addams and Tina San Antonio (replacing an injured Tessa Blanchard), both of which WSU fans might be pretty familiar with. Unfortunately, this match started off pretty good, but never quite got out of first gear. It ended up breaking down, especially toward the ending, but it was a good effort on both ladies’ part. Next up, relative newcomers Roni Nicole and Aja ‘Super’ Perera locked horns, but it had similar problems as the first match. While I felt both ladies did a great job storytelling (Aja just wanted to be Roni’s friend…), the match didn’t take resonate with me. I will say that Aja’s quirky, kid friendly persona was pretty infectious. from the Legend of Zelda entrance theme to the superhero gear, I couldn’t help but take a shine to her.

Business picked up considerably in the third match, as the Kimber Lee took on Hania, the Howling Huntress and La Rosa Negra in a three way match. If you aren’t familiar with the work of these three women, they have been making waves in many promotions recently, notably SHIMMER, SHINE and WSU. All three came in firing on all cylinders, putting on a match that easily could have been the main event on any show. The crowd went wild as the ladies hit crazy spots, like a triple armdrag (which is way cooler than it sounds) and an unique variation of the Tower of Doom spot. After the match, all three ladies got a standing ovation from the crowd, which was definitely well deserved.

After a brief intermission, Valkyrie hit us with another crazy match, as the the debuting Mia Yim took on “Bonesaw” Jessie Brooks in a fantastically brutal match. It’s been quite some time since I’ve seen Bonesaw live, but it was like watching an entirely different wrestler. She has really embraced her “Baddest Bitch” persona and made it her own, and I am definitely a fan. Watching Bonesaw and Mia trade strikes and suplexes back to back was just amazing, and like the three-way before it, easily could have been the main event of this show. Once again, the fans were on their feet once every thing was said and done.

The next match was a bit of a step back, in my opinion, as Midwest wrestler Mary Elizabeth Monroe made her debut against Mistress Belmont. Not a bad match, but I felt it dragged a bit toward the middle, especially after two crazy matches in a row. That being said, the technicolor Monroe was pretty popular with the crowd, so I wouldn’t be surprised to see her appear in Valkyrie at future shows.

Last, but not least, the main event saw Kacee Carlisle take on Sumie Sakai to crown the very first Valkyrie Champion. I will admit, I had no idea what to expect, as my knowledge of both competitors was very limited, but they did not disappoint. Sakai threw everything she had at Carlisle, foiling several of her attempts to bend the rules, and together they put on a satisfying title match to close out the show.

All in all, Valkyrie III was a pretty enjoyable show. Even with a few hiccups, they put together some really good matches and stories, while keeping the crown intrigued and interested. While I can’t compare this show to the last two, I will be able to compare it to the next one they run out of Brooklyn. Consider me officially a Valkyrie fan.

All matches from Valkyrie III will be available soon on ClickWrestle.