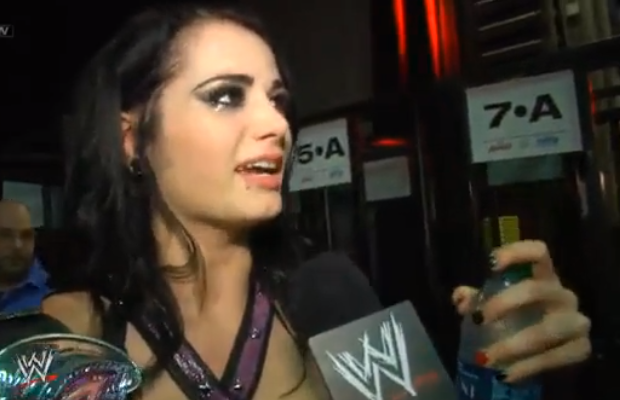 The WWE has released a video of Paige immediately after her win, and she is seen celebrating with face and heel Divas alike.

The youngest female main roster champion in WWE history expressed her thoughts in an impromptu interview with Byron Saxton.

“Usually Paige is very angry and stuff but this is the most overwhelming experience of my life”, said the first Diva to simultaneously hold the WWE Divas and NXT Women’s Championships. “This is what I’ve been trying to get to my whole wrestling career so this is literally my dream come true.”

Paige won the WWE Divas Championship last night on Monday Night Raw after she made her debut. She made her way to the ring to congratulate the then champion AJ Lee, only for AJ to attack her and try and make an example of her. Paige quickly wiped AJ’s confidence away, reversing the Black Widow into the Paige Turner for the win.

Watch the emotional video below:

Who do you want to step up next to face Paige?