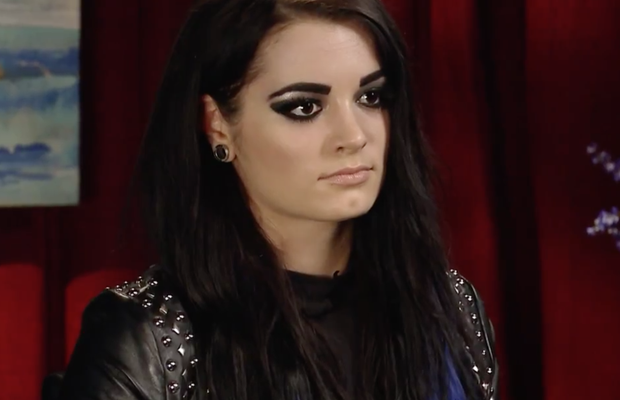 Paige called Naomi’s ambush in London – an attack that put her on the sidelines for a month – one of the most humiliating experiences of her life, because it all went down in front of her friends and family.

Addressing Naomi directly, Paige calls her “Mrs. Clinger-On, Mrs. Chameleon, Mrs. Riding-Everyone’s-Coattails.” She references how Naomi got her start in the WWE, calling her Funkadactyl faction with Cameron and Brodus Clay the “dancing dinosaur group”.

Paige then accuses Naomi of trying to steal her husband Jimmy Uso‘s spotlight by moving on to manage him and his brother Jey Uso. She says she was a boring valet, showing no personality.

Making her way back to Naomi’s attack on her, Paige says she’s jealous of everything the two-time Divas Champion has accomplished. She gives Naomi credit for doing it, though, because she then “finally became relevant”, but questions why Naomi then paired up with Tamina Snuka, who she calls “unrelevant”.

Turning to the Divas Title match this Sunday, Paige says she’s comfortable going it alone, unlike Naomi and Nikki Bella, who will have backup. She says she’s used to being a loner and admits that she’s not good at making friends.

Closing out the interview, Paige promises to win this Sunday and become a three-time Divas Champion.

Who are you rooting for this Sunday?