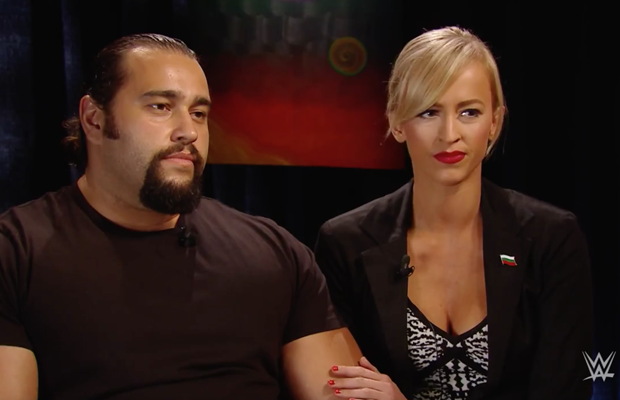 Ahead of Rusev‘s one-on-one match with Dolph Ziggler at SummerSlam this Sunday, the Bulgarian Brute and Summer Rae sat down with Michael Cole to talk about their ongoing issues with Ziggler and Rusev’s ex, Lana.

When Cole asks Rusev if he still loves Lana, Summer fields the question, wondering why it was even asked. She wonders why he would love Lana when he has her by his side. Rusev eventually says, “No.”

Cole asks Rusev why Summer is dressing like Lana if he isn’t still obsessed with her. Summer corrects him, saying that she’s not dressing like Lana. She says Lana wishes she could wear the look as good as she does. She claims that she’s more than willing to “go the extra mile” if it makes Rusev happy.

On the incident on Raw that saw Rusev use Summer as a human shield when he was attacked by Dolph, Summer claims that it was all her fault. She says she apologized to him for getting in the way. Rusev, she says, is no coward.

When asked about Lana’s kick, Summer is unimpressed. She says she has plenty of kicks of her own. Lana’s attack was a cheap shot, she says, and if Lana wants to stick to cheap shots, she’s more than willing to deliver some of her own. When Rusev says they’re done with cheap shots, Summer quickly changes her mind.

Rusev closes the interview by vowing to destroy Dolph. He says that, when he’s finished with him, he’s going to tell Lana, “You are crushed.”

SummerSlam airs live this Sunday on the WWE Network starting at 6pm ET with the Kickoff show.

What do you want to see happen with Lana and Summer at SummerSlam?