What is Women’s Wrestling’s Best Finisher? Round 1: Eat Defeat vs. Sharpshooter 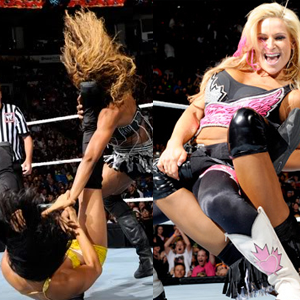 Round 1: One’s an attack and the other’s a submission, but both can lead to permanent damage. Gail Kim‘s Eat Defeat and Natalya‘s Sharpshooter are direct threats to your teeth and legs.