Who is Wrestling’s Best Mean Girl? Round 1: Karen Jarrett vs. Sunny 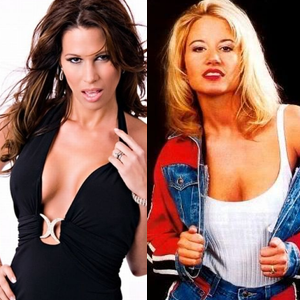 At its root, wrestling has always been about good vs evil, bad guys vs good guys — or in our case, bad girls vs good girls.

In a brand new feature at Diva Dirt, we want you to help us pick wrestling’s best mean girl. Now, there is a clear distinction between a mean girl and your regular “heel”. When we say “mean girl” we refer to the women in wrestling who were feisty, vindictive, acid-tongued and bitchy! They may not necessarily be the toughest, or the baddest, but they certainly had tons of personality.

Based on your nominations, we picked the 16 most mentioned women in wrestling to advance to our knock-out bracket tournament. Keep your eyes peeled over the next few weeks as you will be asked to vote between some of wrestling’s best mean girls and help us whittle it down from just 16 to one!

Round 1: In the rough-and-tumble world of wrestling, Karen Jarrett and Sunny both preferred to watch from the sidelines, using means other than mat skills to get what they wanted. Karen has double-crossed men, interfered in countless matches and ruled the Knockouts Division with brazen bias. Sunny is known as the “Original Diva”, and you don’t earn a moniker like that by being sweet and docile. On the contrary, Sunny was an accomplished manager, helping her men to championships through some masterful bending of the rules. Both of these mean girls preferred to control the in-ring action from the outside, but who was better at it?

MORE ROUND 1 POLLS: The Beautiful People vs Maxine | Sable vs Trish Stratus | Ivory vs. Melina | Maryse vs. Vince’s Devils | Dawn Marie vs. Stacy Keibler | The Bella Twins vs. Stephanie McMahon

Who did you vote for? Tell us in the comments and on Twitter by sending a message to @divadirt!