Will Ronda Rousey Compete at WrestleMania 32? 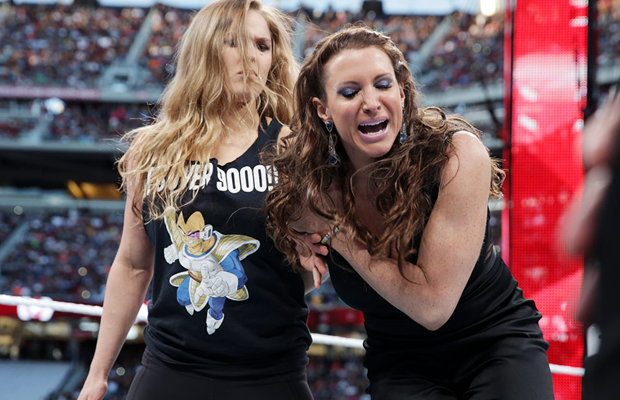 Ronda Rousey created perhaps the most buzzworthy WrestleMania moment on Sunday when she hopped the barricade and came face to face with Stephanie McMahon and Triple H.

After exchanging words with Stephanie and nearly capturing her in her infamous armbar, the undefeated MMA champion stood tall alongside her Furious 7 co-star The Rock, perhaps foreshadowing a future WrestleMania match.

Rousey’s agent Brad Slater has confirmed that the moment was in the works for months and was cleared with UFC President Dana White, telling MMAFighting.com:

“I always, always call him and make sure he is OK with anything we ever do in movies, television and otherwise.”

As for Ronda’s future in wrestling, Slater says that it is unclear whether she will be entering the ring for an actual match. Even so, Ronda’s made it clear that she and The Rock are “just getting started,” tweeting:

She also tweeted a link to an article speculating that she may team up with The Rock for a match at WrestleMania 32.

WrestleMania 32 is a year away, but it certainly looks at though seeds are already being planted for the big show.

Do you think we’ll see Rousey compete at WrestleMania 32?