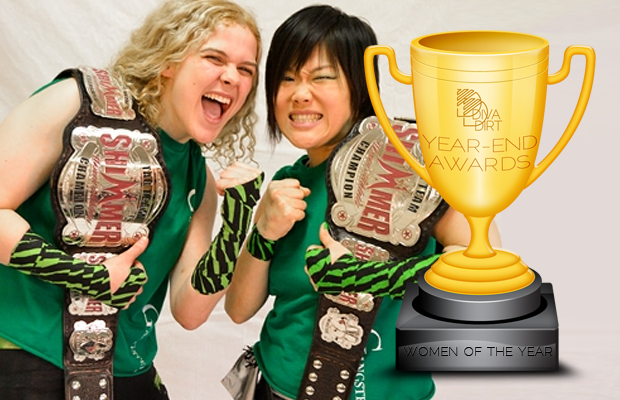 From makeshift tag team to dynamic duo, Kellie Skater and Tomoka Nakagawa have taken the SHIMMER tag team division by storm in 2013. Originally teaming up for a tour in Japan (along with SHIMMER mainstay Portia Perez), the international tandem brought their partnership overseas to SHIMMER, and working their way up the card, eventually earning a shot at the SHIMMER Tag Team Championships.

Although they couldn’t score the titles on the first shot, 3G managed to win the belts in a no disqualification match on SHIMMER Volume 57, shooting to the top of the division.

Since becoming champions, Skater and Nakagawa have defended their titles successfully against the likes of LuKana (LuFisto and Kana) and Made in Sin (Allysin Kay and Taylor Made) among others, ending their year as strong as they started it.