Women of the Year 2013: The Blossom Twins 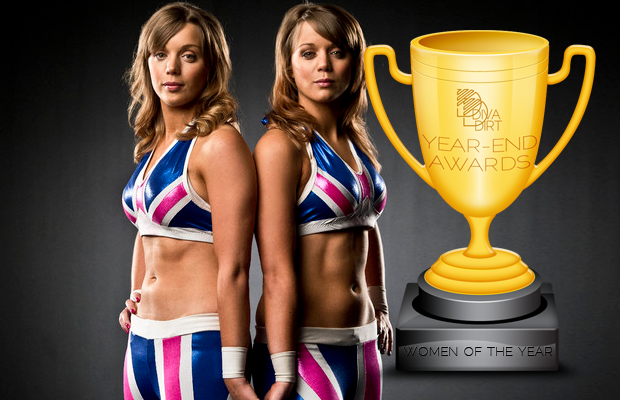 This was a banner year for sinfully sweet British duo known as the Blossom Twins. Hannah and Holly not only competed for their regular promotion, Ohio Valley Wrestling, but they made their TNA debut in the most unique way. In January, the twins appeared on TNA Wrestling; British Bootcamp competing for a TNA contract that was eventually won by Rockstar Spud. During the show they would get a chance to go to the TNA Hall of Fame ceremony and then compete against Gail Kim and Madison Rayne.

Despite not winning the competition, TNA kept the girls on call, letting them team with Marty Scurll to face Gail, Tara and that guy from Big Brother. They would come up short in that match, but Dixie Carter took notice. Hannah Blossom would get a chance to be part of Gail Kim’s open challenge later on in the year, and she would also participate in Knockout Knockdown and the TNA World Cup of Wrestling.

Over in OVW, Hannah would also become OVW Women’s Champion for the third time, winning an exciting ladder match that featured her sister, Holly, Taeler Hendrix and Lei’D Tapa. It came as a shock to a lot of people that Hannah won that match, given the war path that Tapa had been on and unfortunately for Hannah, Tapa would end up being the one to take the championship from her a few weeks later.

The reign of Hannah Blossom was cut far to short in OVW, but one thing is for sure, the Blossom Twins are now on a lot of radars. The sugary sweet pair, known for their love of baking and all things cupcake, have proven time and time again that there’s so much more to them than just the twin thing and their gorgeous faces. They’re on the up and up, and hopefully more good things come their way in 2014.