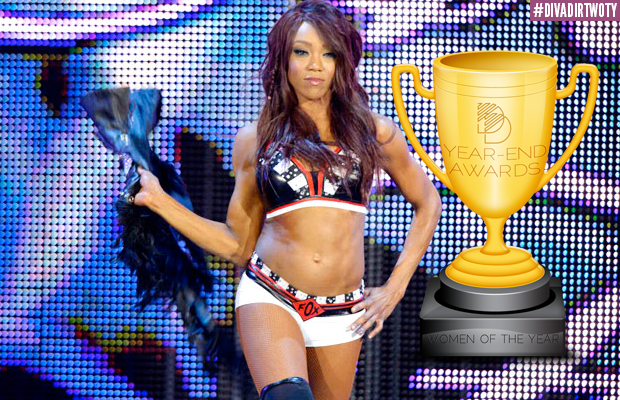 For the first half of 2014, Alicia Fox was spending her time with her random bestie, Aksana. The duo made quite the impact…on Superstars, winning tag team matches against random diva teams like Eva Marie and Natalya. While the occasional success was a nice treat for us Foxy fans, we knew it wouldn’t lead anywhere. That is, until Paige debuted in WWE. After winning the Divas Championship from AJ Lee, Paige‘s second Raw match was against Alicia Fox.

The crowd was shocked at the intensity Alicia showed, even though we all knew she already had it. After a series of entertaining matches with Paige, Alicia finally had her character break through. I think we in large part can thank Solange Knowles for her meltdown on an elevator for the inspired character change. On the Raw after the Solange news broke, Fox threw her first temper tantrum after a match by stealing JBL’s cowboy hat and going berserk on the audience. I cried tears of joy to finally see Alicia getting a push.

Alicia Fox quickly became one of the top Divas of the division, earning herself a Divas Championship match at June’s Payback pay-per-view and even defeating Paige in the Divas Champion’s own home country. Unfortunately, I think we all know the reality that Alicia Fox will most likely never hold the Divas Championship again but the fact that WWE has solidified her as a legitimate in-ring veteran and given her a character that’s over with the crowd is a big enough treat for us.

Now joining the cast of Total Divas, I have no doubt that Alicia will win over the hearts of the E! viewers…or at least pour soda on them.