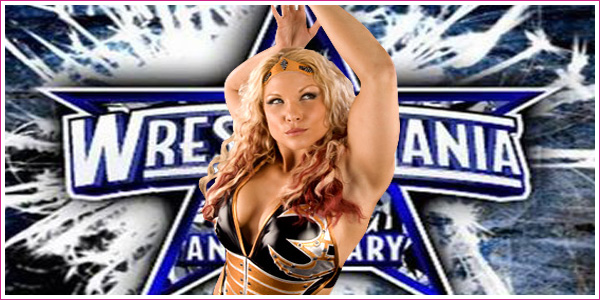 With the Divas Battle Royal at WrestleMania 25 quickly approaching, Diva Dirt has decided to take a closer look at each of the known and rumored participants in the matchup and assess their odds of winning as being High, Moderate, or Low. The winner, of course, will be crowned the first ever â€œMiss WrestleMania.â€ This is a new feature that will take place right up until the big day in Houston, TX on April 5th, 2009 and will be covered by yours truly, the â€œMouth of the South,â€ Hassan! I will save my prediction for the winner as the very last WrestleMania Spotlight profile I do. Be sure to leave your opinion in the comments! Letâ€™s get right into itâ€¦ bow down to the Slammy Award winning Raw Diva Beth Phoenix!

Diva: Beth Phoenix
Real Name: Elizabeth Carolan Kocanski
Hometown: New York, New York
Birthday: November 24, 1980
Brand: Raw
Height: 5’7″
Weight: 150 lbs.
Finisher: Glam Slam (Elevated Double Chickenwing Wheelbarrow Facebuster)
WWE Debut: May 8, 2006 edition of Raw
Career Highlights: WWE Womenâ€™s Champion (x2), ranked #2 of the 50 best female wrestlers of 2008 by Pro Wrestling Illustrated, Slammy Award Winner for Diva of the Year (2008), OVW Women’s Champion, GLORY Champion, FNW Cruiserweight Champion, appeared in February 2009 issue of FLEX Magazine, first female varsity wrestler at her high school, Northeast Freestyle Women’s Champion for her weight class at the NY Fair in 1999, named most oustanding wrestler of 1999 by Brockport Freestyle Tournament, member of USA Wrestling, competed in first ever Women’s Ladder Match in OVW and first ever “I Quit” match
â€œDid You Know?â€ Fact: When Beth was 11 years old, she won a coloring contest held by the WWE where the prize was tickets to a television taping; she credits that moment for how she fell in love with wrestling. She is married to Joey Carolan (Joey Knight). When Beth first entered the independent circuit in 1999-2000, her first opponent was none other than Mickie James

Beth Phoenix is, without a doubt, the Glamazon. WhenÂ BethÂ was in high school, sheÂ competed on her high school’s varsity wrestling team. In 1999, Beth graduated from high school and enrolled in a professional wrestling school while also attending college. She made rounds in the independent circuit, competing against both men and women as well as appearances in SHIMMER.Â Phoenix made her debutÂ in OVW during July of 2004 as a valet and on-screen girlfriend to Chris Masters. After feuding with Shelly “Ariel” Martinez, Beth made her debut in the WWE in 2006 as a surprise friend of Trish StratusÂ to battle the psychotic Mickie James, where the storyline was that Beth and Mickie apparently had a history together, as Beth attacked Mickie for “ruining everything.” Her first stint on Raw was short lived – Beth suffered a fractured mandible on the Â June 5, 2006Â edition of Raw after a kick to the face by Victoria.

Beth returned to OVW in August of 2006, where she feuded with Katie Lea, competed in the first ever women’s Ladder Match, and went on to become the OVW Women’s Champion. Beth returned to Raw on July 9, 2007 as a heel, coming to the aid of the “injured” Melina to battle Candice and Mickie James and picked up her “Glamazon” nickname. At SummerSlam 2007, Beth Phoenix won an interpromotional Divas Battle Royal to become the #1 contendor to Candice’s Women’s Championship, which she would capture at the No Mercy pay per view later that year. July 14, 2008 saw Beth Phoenix return to the ring after a month off TV, where she accepted an open challenge by Santino Marella and went on to beat him in one of my favorite of Beth Phoenix’s matches since she was able to cleanly beat a male superstar. This “feud” developed into a romance, where the two became known as Glamarella. SummerSlam 2008 saw Beth Phoenix capturing the Women’s Championship for a second time in an intergender tag team winner-takes-all match which she and Santino won. Beth held the title until the Royal Rumble 2009, where Melina won the title.

Slammy award winning Beth Phoenix is clearly one of the front-runners to win this matchup. She is arguably the physically strongest Diva on the roster other than Natalya and also has experience in Battle Royal matches as well as a win at WrestleMania XXIV. Her storyline and character development with Santino has gone over very well with male and Diva fans alike. I personally love every aspect of Beth. She is such a powerhouse and never puts on a bad show. It’s always a treat when WWE puts her in the ring with a male superstar because, since Chyna, she is really so good in the ring that she really could beat several male superstars, in my opinion. I think WWE has worked with her character well, and it’s a shame Natalya didn’t get this kind of luck. I’m pretty confident that if Beth doesn’t win the Battle Royal, she will definitely be one of the last Divas standing. Expect her to make an impact at WrestleMania and eliminate Divas left and right. Her blog feud with Trish Stratus might be further developed since these two have some unfinished business in the ring follow Trish’s one night appearance on Raw a few months back. Beth Phoenix really is the one to watch and, if you’re another Diva inÂ theÂ match,Â the one to beat.

Beth Phoenix’s Odds of Winning On The Hassan-O-Meter: High