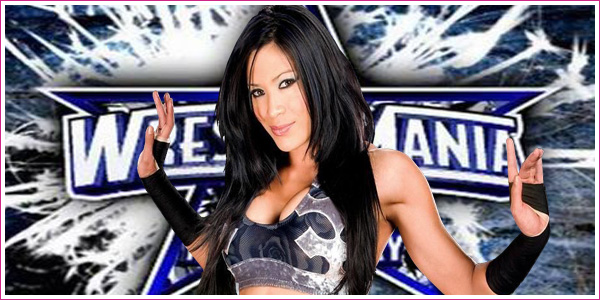 With the Divas Battle Royal at WrestleMania 25 quickly approaching, Diva Dirt has decided to take a closer look at each of the known and rumored participants in the matchup and assess their odds of winning as being High, Moderate, or Low. The winner, of course, will be crowned the first ever â€œMiss WrestleMania.â€ This is a new feature that will take place right up until the big day in Houston, TX on April 5th, 2009 and will be covered by yours truly, the â€œMouth of the South,â€ Hassan! I will save my prediction for the winner as the very last WrestleMania Spotlight profile I do. Be sure to leave your opinion in the comments! Letâ€™s get right into itâ€¦ scream your lungs out and do a split for Raw Diva Melina!

Melina began wrestling in 2002 in the EWF, where she was praised as one of the best women to come through the company. After being eliminated on the first episode of Tough Enough, Melina made her OVW debut in March of 2004, where she soon teamed up with John Morrison and Joey Mercury to form MNM, the tag team which would later debut on SmackDown in April of 2005. In June, Melina entered the ring in her first match against Michelle McCool, which she won. Off screen, John Morrison and Joey Mercury didn’t get along, so MNM was split up with Morrison & Melina heading to Raw in May of 2006.

Melina began actively competing in the Divas division in January of 2007 when she feuded with Mickie James and eventually beat her for the title. In April 2007, Mickie won the Women’s Championship at a house show in Paris, but Jonothan Coachman awarded Melina a rematch the same night, where Melina won the title back for her second reign with the gold. Her feud with Beth Phoenix in 2008 led to her face turn, where she would eventually defeat Beth at the 2009 Royal Rumble to win her third Women’s Championship.

I think Melina has a good chance of making it to the end of the Divas Battle Royal, but won’t be the winner. Though Melina is one of my top 3 personal favorite Divas, I think her current run as Women’s Champion (and as a face) is getting pretty stale. She plays a much better heel in my opinion and I think it will be hard to put her over as the winner. There will definitely be plenty of action between her and Beth Phoenix in the match, and Melina has done very well in Battle Royal matches. She won the interpromotional Battle Royal on October 28, 2005 by eliminating Trish Stratus and she also won the Battle Royal on December 29, 2008 to become the #1 contendor to Beth’s title, where she would go on to beat her at the Royal Rumble.

With plenty of experience in the ring as well as in Battle Royal matches, Melina definitely has the wit and the know-how when it comes to winning a match like that. I definitely think that Melina will be one of the last Divas standing and certainly could very well walk away the winner, but I’m not positive WWE will go that route and give Melina the win. On another note, I also think Melina’s run as the face Women’s Champion has run it’s course. Melina played the bitchy, screaming hellcat character so well and I think it’s time for a switcheroo back to being “the most dominant Diva in the WWE.”

Melina’s Odds of Winning On The Hassan-O-Meter: High