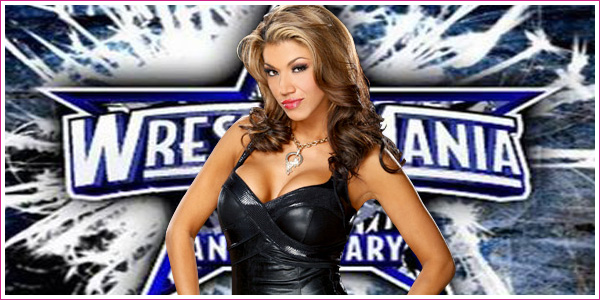 With the Divas Battle Royal at WrestleMania 25 quickly approaching, Diva Dirt has decided to take a closer look at each of the known and rumored participants in the matchup and assess their odds of winning as being High, Moderate, or Low. The winner, of course, will be crowned the first ever â€œMiss WrestleMania.â€ This is a new feature that will take place right up until the big day in Houston, TX on April 5th, 2009 and will be covered by yours truly, the â€œMouth of the South,â€ Hassan! I will save my prediction for the winner as the very last WrestleMania Spotlight profile I do. Be sure to leave your opinion in the comments! Letâ€™s get right into itâ€¦ introducing Raw Diva Rosa Mendes!

Diva: Rosa Mendes
Real Name: Milena Roucka
Hometown:Â Vancouver, British Columbia
Birthday: October 25, 1979
Brand: Raw
Height: 5’8″
Weight: 125 lbs.
Finisher: Slingshot Inverted Suplex Slam, La Loca Neckbreaker (Flying Neckbreaker)
WWE Debut: November 24, 2008 edition of Raw
Career Highlights: Placed 4th in the 2006 Diva Search, OVW Women’s Champion, won the Piel Dorada modeling contest, been in commercials for Trident and Lux Soap, named #43 out of the top 50 female wrestlers of 2008 by Pro Wrestling Illustrated
â€œDid You Know?â€ Fact: Milena has several PlayStation 2 video game characters modeled after her including Izzy inÂ “Need For Speed” as well as inÂ “Most Wanted.” In addition, prior to making her WWE debut, she said she would prefer to be on Raw and would pick Beth Phoenix as the Diva she’d most like to work with… guess that turned out well!

Rosa jumped onto the wrestling scene when she participated in the 2006 Diva Search. Although she didn’t win the competition, she finished 4th overall. Just a few days after her elimination, WWE handed her a developmental contract and she was sent to OVW to begin training.

After serving as a manager in OVW for some time, Rosa captured the OVW Women’s Championship in a 6-way matchup in September of 2007. Once winning, she had an ongoing feud with Katie Lea who she would eventually lose the title to. Only a few weeks passed by after losing her OVW gold when OVW and WWE severed ties, and Rosa was one of the lucky ones who was sent over to FCW where she continued her training. In November of 2008, Rosa appeared as a planted Beth Phoenix super-fan in the audience. Finally, after jumping the rail and attacking Melina, Glamarella appointed Rosa Mendes as their new intern, a role she continues to have to the present day.

I’m pretty sure we can all agree that Rosa Mendes won’t walk away next Sunday as the first ever Miss WrestleMania. This is going to be her official in-ring debut for the WWE, and since she has never even stepped in the ring, there’s pretty much no chance of her winning. I think WrestleMania will serve Rosa in a different way: by giving her much needed character development.

Since she appeared on Raw, Rosa hasn’t done anything noteworthy except interfere in a couple of matches and attack a few of the Raw face Divas. She’s been acting like a caged animal ready to pounce on anyone who opposes Beth Phoenix, and now she will finally have the chance to get in the ring. Also, Divas like Melina and Kelly Kelly will finally have the chance for some payback against her. We’ve all seen the crazy fan-gone wrestler storyline about 3 times now (Tori, Mickie James, and now Rosa) and I think besides that it is getting really old, it isn’t even a beneficial storyline since it keeps Rosa out the ring for so long.

At WrestleMania, Rosa will finally be able to step in the ring and become an active Diva of the roster, similar to Tiffany’s situation. Plus, I may be going out on a limb here, but I’m predicting something to happen between Beth and Rosa. Having Rosa as Beth’s little useless sidekick is a waste of character and storyline, in my opinion. It’s also gotten old and run it’s course, and if I were Creative, I’d split these two up. I’m thinking Beth might run crazy and eliminate two or three Divas within a minute or two, and Rosa will be one of them. After all, it’s every Diva for herself in a match like this, though there isn’t a real prize other than bragging rights. The Creative Team could also have Rosa forgiving Beth for eliminating her, that way Rosa will have some more time under Beth’s wing to get “experience” since after all, her gimmick on TV is that she’s just a fan, not a wrestler.

There could even be a twist up, where Rosa will want to leave Glamarella for feeling under-utilized. She could turn on Beth by eliminating her and this way Beth’s character won’t be hurt or seen as weak since Rosa tricked her. One scenario I kind of like is having Rosa turn out to be related to Melina. After all, they could pass as relatives. And who knows, maybe Rosa Mendes will get a new name because I really don’t like the name Rosa Mendes. At any rate, if you ask me, Rosa Mendes will not be Miss WrestleMania this year.

Rosa Mendes’ Odds of Winning On The Hassan-O-Meter: Low