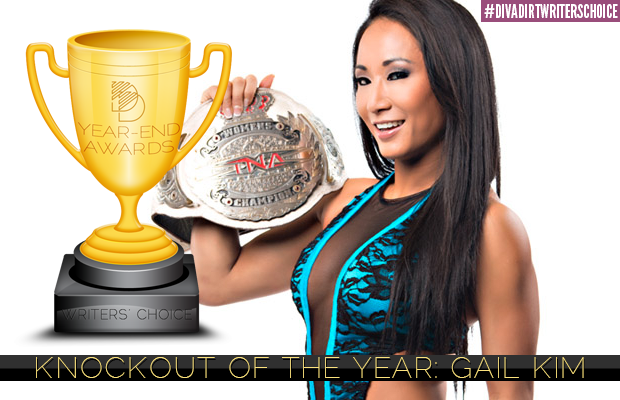 Knockout of the Year: Gail Kim

Last year, she was the glue that held the Knockouts division together. This year, Gail Kim owned it.

Never mind that she held the Knockouts Title for nearly three months. Forget that she wrestled in a Last Knockout Standing match, hit an Air Raid Crash off the top rope onto a steel chair, wrestled inside of a steel cage or main evented Impact. The reason she is Diva Dirt’s Knockout of the Year for the third year in a row is because she *is* the Knockouts division. 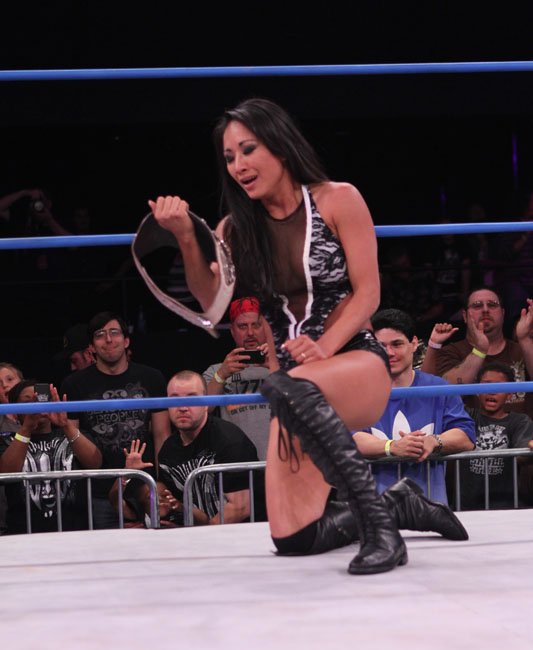 That’s not to discount what the other Knockouts have contributed this year. Angelina Love‘s return, the reunion of The Beautiful People, Brittany‘s memorable run, Havok‘s debut, Madison Rayne‘s heel turn and Taryn Terrell‘s return to form have all made for exciting television. But it’s Gail Kim who stood above them all, the female face of TNA.

She’s also had a hand in shaping its future, the only female judge on the second season of British Boot Camp. Her skill, experience and intelligence have made her the perfect person to represent the Knockouts, train those to come and carry the division into the future. Simply put, she is the past, present and future of the Knockouts.

Gail is the constant, the one you can count on to always deliver. She puts her body on the line, creating epic moments in victory and selling the power of her opponents in defeat. Thanks to her, the Knockouts division is alive and well, the women main eventing Impact and wrestling in steel cages like it’s an every day occurrence.

That’s the thing about the Knockouts: they have a handful of epic moments every year – ones that if they happened in the Divas division, people wouldn’t stop talking about them. But it’s normal, par for the course even, for the Knockouts to wrestle in street fights, Last Man Standing matches, Steel Cage matches and main events.

They’re taking bigger strides towards bringing men and women to a level playing field than anyone else. One day, we’ll look back and see what they’ve done as immensely important legwork in women’s wrestling’s struggle for respect and recognition.

While all of this happening, Gail Kim is at the forefront, leading the charge.