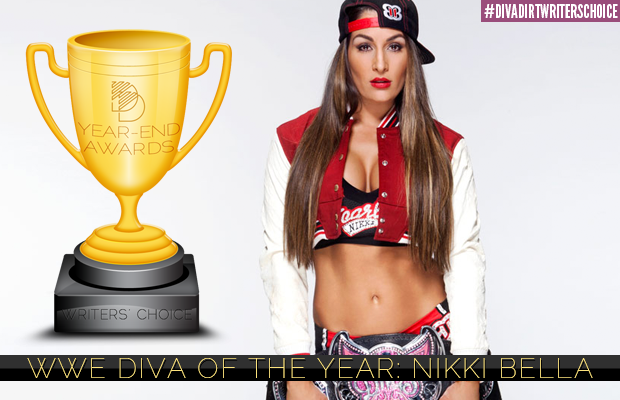 “How did you spend your year?”

When Nikki Bella uttered these words in the promo for her match against Charlotte at Night of Champions, chills shot down my spine. Clips from Nikki’s successful title defenses, media appearances and encounters with the other Divas flashed across the screen while a clock counted the number of days she had reigned as Divas Champion. In that moment, I knew for certain Nikki had earned her place at the top of the Divas division.

2015 was Nikki’s year. She dominated the Divas division. Although sometimes she would use some help from Brie Bella and Alicia Fox to get the job done, Nikki truly made those strides on her own.

Nikki began her year already atop of the Divas division. She had been holding the Divas Championship since Survivor Series, and after a successful title defense against AJ Lee at TLC, was poised to take on any and all challengers. Natalya was the first Diva to step up to the plate against Team Bella. She aligned herself with a newly face Paige and the duo took on the Bellas at the Royal Rumble. Despite Paige and Natalya communicating well as a tag team, they were no match for the tandem of Brie and Nikki, who outsmarted their opponents to get the win. This was the first of many tag team victories for the duo this year.

Paige continued to chase Nikki for the Divas Title, leading up to a match at Fastlane. Along the way, Nikki proved herself to be the heel of the division by stealing Paige’s clothes and spraying the raven-haired Diva with tanning spray in the middle of the ring. At Fastlane, Nikki held onto her title, reigning as champ on the road to the biggest show of the year, WrestleMania.

Weeks before ‘Mania, Nikki’s challenger for the title seemed quite unclear. While Paige continued to go after Nikki week after week, AJ Lee was resting on the sidelines at home and the world knew she’d be coming back for a piece of the Bellas. On an episode of Raw in early March, the Bellas took on Paige and Emma in a 34-second tag match which sparked an outrage amongst Diva fans. The #GiveDivasAChance movement went into full effect and the Bellas, along with the entire roster, expressed their outrage over their booking. It was a moment of women’s empowerment for professional wrestling and the women were taking matters into their own hands. The movement trended for days and even gained the attention of Vince McMahon, who acknowledged the movement in a tweet.

After #GiveDivasAChance spread like wildfire, AJ Lee returned to join Paige and take on Nikki and Brie leading into WrestleMania. Nikki showed during this time that not only had her in-ring skills grown, but her mic skills had gotten incredible as well, as she delivered blockbuster promos to hype the heavily discussed tag team match at ‘Mania. When the big day came, the “Freaks and Geeks” ended up defeating Team Bella, but Nikki still held onto her Divas title.

With AJ leaving the company, Nikki now looked for a new challenger for her title, as Paige was sidelined with other obligations. Naomi was the one to step up to the plate, forcing Nikki and Brie into a brief babyface run. While the character change was random and unexpected after the hard work the Bellas had done to establish their heel characters, they ran with it. Nikki immediately earned the support of the fans and acted as a babyface during her match with Naomi at Extreme Rules. Picking up the win, Nikki was then faced with both Naomi and the returning Paige.

With Paige back in the picture, Nikki returned to her old ways by having her sister Brie disguise herself as the Divas Champ during some of her matches and pulling some good old “twin magic”. While some fans hated to see the return of this maneuver, I loved it. It was a great throwback and showed just how badly Nikki wanted to hold onto her title. In addition, the quality of the matches we were seeing out of Nikki were nowhere near what we had seen back in 2008.

Nikki was on top of the world heading into the summer and getting closer to breaking AJ Lee’s record as longest reigning Divas Champion. Some fans were growing tired of the Bellas dominating the division. Nikki and Brie even enlisted the help of Alicia Fox, and the trio put every challenger in their place. However, that all changed on a night in July.

For the remainder of the summer, we were treated to incredible and lengthy tag team and singles matches with the nine women involved. No one had yet stepped up to the plate for Nikki’s title, though as she continued to reign supreme.

Following a loss to PCB at SummerSlam, Charlotte emerged as the next challenger for the Divas Title. She decided to invoke her match on the Raw before Night of Champions, the very day when Nikki was 24 hours shy of becoming the longest reigning Champion. The match was heavily promoted and all eyes were on the screen as the women faced off. In an act of twin magic gone wrong, Charlotte won the title…briefly. Stephanie McMahon emerged and finally repaid her Nikki for helping her win at SummerSlam in 2014. Since Charlotte had pinned Brie, the match would be a disqualification, meaning Nikki retained her title and officially became the longest-reigning Divas Champion.

While bitter fans thought this was outrageous and claimed Nikki’s win was only because of her relationship status or a grudge WWE had with the former longest reigning Divas Champion, they had zero factual information to back themselves up. The only fact was that Nikki worked for this honor. When the bitter fans went back and looked at the consistently improving quality of Nikki’s work, her charitable acts throughout the entire year and how she served as a true role model, they didn’t have a leg to stand on. Nikki deserved this accolade. She is a champion.

That Sunday at Night of Champions, Nikki’s reign ended to in a rematch to Charlotte. In one of Nikki’s best showings as a heel, she truly went toe-to-toe with the former NXT Women’s Champion and once again proved she’s not just some model. She did the same a month later by impressing fans in a rematch at Hell in a Cell.

The most incredible thing about Nikki’s work this year is that she was injured through most of it. Following her Hell in a Cell match, Nikki decided to take some much deserved time off. Nikki revealed she’s been battling a nagging neck injury and finally decided to rehabilitate the problem. She returned for one night on the most recent Raw to accept the award for Diva of the Year at the Slammys, a well-deserved and proud moment for her and her fans.

In addition to all of her in-ring work, Nikki gained celebrity status this year as one of the stars of Total Divas. The program has gained a huge following and its fifth season will kick off in early 2016. Her hilarious antics, adorable relationship and drama with her sister and Eva Marie have been some of the biggest highlights of the hit reality show. She was also nominated for Female Athlete of the Year at the Teen Choice Awards and been recognized by various organizations for heartfelt charity work this year.

2015 was the year of Nikki Bella for many reasons, but most of all for proving her doubters wrong. Nikki has faced an uphill battle her entire career. Coming into the company as a model already put her at a disadvantage, especially when she was mainly used as arm candy up until 2011. In 2012 when her and Brie briefly left WWE, I remember us at Diva Dirt even joking about the idea of giving them the Diva Dirt Legacy award that year. Okay, maybe I was a little serious about it.

Looking back to 2012 and Nikki’s three-minute match with Layla at Extreme Rules, it doesn’t even seem like she was the same person. She’s grown into such a performer and become the face of the women’s division that WWE has been searching for since Trish Stratus‘s retirment. She looks as though she’s been wrestling her entire life during her matches, is poised and confident while speaking and battles through courageously when ignorant people try to discredit her work for whatever false rumor they read online.

Nikki battled this year – to keep her title, to prove she deserves to be there and to be the face of the women’s division. She did it and throughout all of it she proved to not only be the Diva of the Year, but that she is exactly what she says she is: fearless.

Below, check out a video celebrating Nikki’s history-making year, courtesy of Jordan: