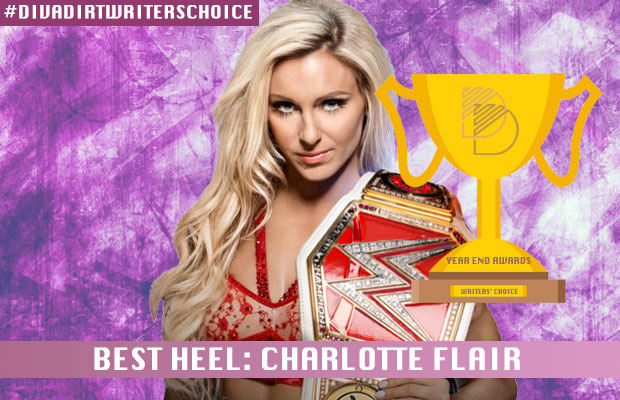 In women’s wrestling, a great heel is a bitch. Period. And in the words of the Queen of Pop Madonna: “I’m tough, I’m ambitious, and I know exactly what I want. If that makes me a bitch, okay.” No other woman in wrestling in 2016 epitomized this mantra like Charlotte Flair.

In January, the then-Divas Champion was involved in a major feud with her ex-BFF Becky Lynch. After Charlotte’s change in attitude from the influence of her Hall of Fame pops Ric Flair, Becky took exception with that and after two very close matches for the Divas title, Charlotte attacked the Lasskicker. And just like that all the selfies, memories, and moments meant nothing to the Divas Champion. She knew Becky had her number, and she wasn’t willing to go down to Becky in their match at the Royal Rumble. In that contest, Charlotte used her father as a tool in the match when Naitch distracted Becky mid-DisArmHer to give Charlotte an opening to retain the title via a spear. A time-tested heel move that generated heat from the crowd.

Flair moved on to feud with Brie Bella after attacking Brie has the lone wrestler to preserve the Bella-Bryan-Cena dynasty. She took credit for Nikki‘s injury and threw shade at Daniel Bryan‘s retirement and begged Brie Mode to be the “sister and wife [Charlotte] knows she can be”. These real life potshots grew even more heat towards Charlotte heading into FastLane’s Divas Title defense.

In my opinion, her performance at Roadblock was one of the best heel performances by a heel woman in WWE history. The story with her and her opponent Natalya was simple. Hometown hero tries to win the title as the evil champion does whatever it takes to not only keep her title, but shove Nattie’s loss in her home country down her throat. An absolute thriller, and again the use of Ric Flair gives Charlotte the win. Charlotte now relies on cheap tricks and tactics to win the match.

WrestleMania’s women’s match took things full circle with the three women that debuted in July 2015. Sasha Banks and Becky Lynch joined Flair in a match that would changed the landscape of the direction of the women in WWE forever. And in true heel fashion, she used Naitch as a tool to hold Sasha Banks from breaking up the Figure 8 on Becky and ultimately got the submission win and became the new WWE Women’s Champion. The crowd in Texas wasn’t having it. AT ALL.

Fast-forward many months later, and Charlotte’s character developed greatly. She ditched her daddy and found a lackey in Dana Brooke. Someone to throw in the way of her challengers and do the dirty work. We can tell she doesn’t live for Dana, but it doesn’t matter. Charlotte is cunning and manipulative and will use anybody and any mean necessary to regain her title.

And then we get to SummerSlam 2016. The night Flair was THE ONLY HEEL TO GET HEAT. Yeah, I said it. She had recently lost the Women’s Title in a thrilling match on a July edition of RAW. The rematch was at the biggest show of the Summer. From the jump, it was decided, Charlotte was the one they didn’t want to win (Charlotte looking so unbothered in her entrance gave me life) and Sasha was the champion they so badly wanted to retain. The excellent storytelling of Sasha’s back injury and Charlotte’s relentless attack on the back made the crowd eat it up. It was amazing. And in a move seen in many of her father’s matches, a simple rollup counter secured Flair her second Women’s Title. Brooklyn was SHOCKED. Stunned. In disbelief. And it quickly turned into anger, it was HEAT.

After a long game of “hot potato” over the title, things ended this year for Flair the way it started. Her on top. Bow Down to the Queen. No other woman on the roster generates the heat this woman does. She’s talented but she’s also vicious. She will do whatever it takes. Moral highground doesn’t mean a damn thing to her and it shows. By any means necessary, she will have that title, and who gives a damn if your feelings are hurt. Oh well. In one of her final promos of the year, she proves why no other heel can touch her. Woo.

2016 proved that Charlotte Flair is tough, ambitious and knows exactly what she wants: to be the WWE’s best athlete. If that makes her bitch, okay.