WSU “Anniversary” Next Saturday on iPPV: LuFisto vs. Shanna for the WSU Title, Hania vs. Athena TLC Match & More 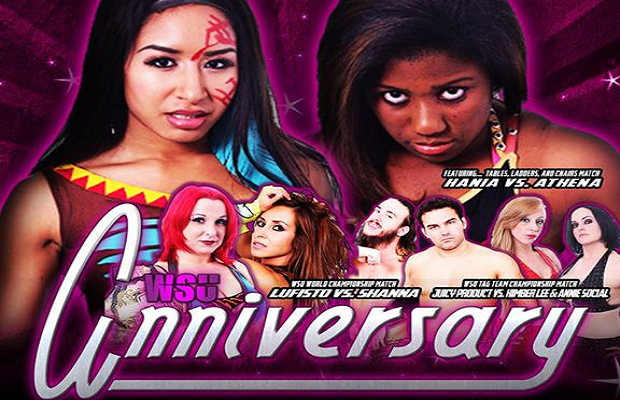 WSU returns to iPPV next Saturday, the 21st of February for “Anniversary”, marking WSU’s eighth year as a promotion.

The show, which will mark WSU’s first event at the legendary 2300 Arena in Philadelphia – the former home of ECW – is heaving at the seams with must-see matches, including three huge title bouts and one enormous deciding grudge match to round off an epic trilogy.

In the main event, WSU World Champion LuFisto defends her title that she’s held since May against “Portugal’s Perfect Athlete”, Shanna, while C.U.N.T. (Kimber Lee and Annie Social) get another chance to win back their WSU Tag Team Championships against current champions Juicy Product (David Starr and JT Dunn), whom Lee and Social both defeated in singles action at the previous WSU show to get this opportunity.

Also, Nevaeh‘s bad blood with WSU Spirit Champion Niya Barela reaches breaking point next week after months and months of being at each other’s throats as the pair finally square off in singles action for Niya’s title.

However, despite those three mouthwatering championship matches, arguably the plum tie of the show looks set to be the Tables, Ladders and Chairs match between Athena and the “Howling Huntress” Hania. After two show-stealing performances at the last two WSU shows, “Resurgence” and “Breaking Barriers”, with both women getting a victory each (and a deluge of plaudits to boot), it’s come down to this rubber match to wrap things up – and with a host of foreign objects at their disposal, this is sure to be chaos at the very least. To get a taste of what to expect, check out this recap of their rivalry so far:

In the undercard, Tessa Blanchard impressed greatly at the last show, narrowly missing out on capturing Niya’s Spirit Title. This time, she has a chance to stick it to the man as she faces Sassy Stephie, fresh into her new role within WSU management.

Another woman who experienced a narrow defeat last time round was Jenny Rose, who came within a whisker of taking the WSU World Title from LuFisto. Her first step back onto the ladder will be against plucky and resilient homegrown talent Brittany Blake.

Meanwhile, Cherry Bomb and Leva Bates both won their singles matches at Breaking Barriers, and have the opportunity to build a streak as they face each other in one-on-one action at Anniversary, while topping things off is Solo Darling vs Mickie Knuckles in a contest that on paper looks like a mismatch – but Solo, though still without a win since arriving at WSU, has impressed in the ring, while a couple of hard-fought victories for Knuckles in recent months have provided a welcome glimpse into her humanity – which can only be positive news for Solo.

What’s more, at the show WSU will induct another star into its Hall of Fame, with former WSU Tag Team Champion and Commissioner Amy Lee being this year’s inductee.

WSU “Anniversary” comes to us live from the 2300 Arena in Philadelphia, Pennsylvania on Saturday, 21st February at 4pm Eastern (9pm GMT), and will be available to watch live on iPPV. To order the show, go to StreamCZW.com. If you can’t watch, keep your eyes peeled to Diva Dirt, where we’ll have live coverage.