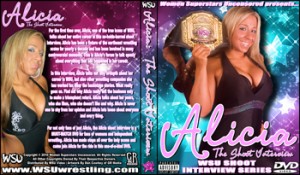 WSU original, Alicia is the subject of two new DVDs released by the company this week. The first is a shoot interview while the second is a ‘Best of’ compilation. Full details below:

For the first time ever, Alicia, one of the true icons of WSU, talks about her entire career in this no-holds-barred shoot interview. Alicia has been a fixture of the northeast wrestling scene for nearly a decade and has been involved in many controversial moments. This is Alicia’s forum to talk openly about everything that has happened in her career.

In this interview, Alicia talks not only in-depth about her career in WSU, but also other wrestling companies she has worked for. Hear the backstage stories. What really goes on. Find out why Alicia really left the business only to make a triumphant return. Alicia talks about her peers, who she likes, who she doesn’t like and why. Alicia is never one to shy from her opinion and Alicia lets loose about everyone and every thing.

For not only fans of just Alicia, the Alicia shoot interview is a MUST-WATCH DVD for fans of womens and independent wrestling. Alicia has made stops all over the indy scene and come join Alicia for the ride in this one-of-a-kind DVD.

For our full question list and to order, please visit WSUVideo.com today. 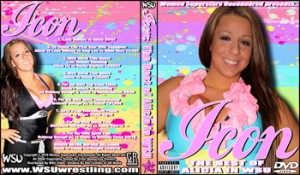 If there was no Alicia, there would be no WSU. In this special DVD release, we recap all of Alicia’s biggest moments in WSU. This DVD includes all of Alicia’s major championship wins & tournament wins. This also has her favorite matches such as her matches with Luna Vachon and Mercedes Martinez. This is for the true womens wrestling fan.

2. To Crown The First Ever WSU Champion
Alicia vs Luna Vachon vs Amy Lee vs Nikki Roxx
7/14/07

9. For the WSU Spirit Title
(c) Brittney Savage vs Alicia vs Brittany Force
8/6/10