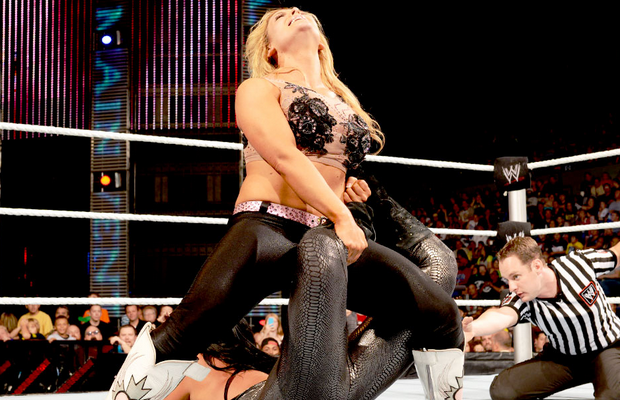 What’s up Diva fans and welcome to this week’s Main Event Redux. It’s been donkey’s years since we last saw the Divas on Main Event, yet HURRAY, they are back. Main Event served as a Total Divas advertisement this week as cast member Natalya squared off against one of the many Divas who didn’t make the show, Aksana. Can the Lithuanian make a statement (oh wait, that’s Tamina‘s line) and prove she should not be overlooked? Or will, as Nattie has done 208464803853 times before, force Aksana to tap out? To the video!

The video begins with The Miz and Josh Matthews rambling on about something nobody cares about before they plug Total Divas and introduce the participants in the ring. We then cut to Monday’s backstage segment on Raw. I know I support the Divas, but OH MY GOD, the acting was utterly cringe-worthy in this scene. However, the shining light within the Divas division, Natalya, was the saving grace and she delivered an almighty slap to Brie Bella, much to the disgust of her sister Nikki and future Academy Award winner, Eva Marie. That’s how you slap Eva. You don’t pat someone’s face, you whack it like you mean it!

Back in the ring and the match starts with both girls locking up, before Natalya slips down the back of Aksana and hits a schoolgirl. The girls then grapple once again, bouncing into the ropes. Aksana slaps the hell out of Nattie’s chest, before taking further advantage with a headlock takeover. Hilariously, Aksana demands Natalya gives up yet Natalya ignores that comment completely and locks a headscissors in on her Lithuanian foe. The girls get back to a vertical base and it’s Tal who gets the upper hand. She delivers a kick and punch before wrenching Aksana with a wristlock, which she then transitions into a hammerlock, and then a headlock and then a headlock takeover. Simple yet effective chain wrestling from one of the world’s best!

Aksana gives Nattie a taste of her own medicine with a headscissor reversal yet it’s not long before the Dungeon Diva is back to her feet. Goldust‘s former gold-digging ex-wife (did they ever get that divorce finalised?) grabs Natalya’s leg before Nattie executes a stunning reversal which she turns in a ankle submission.

Aksana makes it to the ropes, demanding that her adversary gets off (really funny, loved it!) Aksana then delivers a stiff kick before trying to use her WRBLHE – World Record Breaking Longest Headlock Ever. Natalya eventually powers out, but she then gets shoulder blocked for her trouble. Nattie then slides under and jumps over Aksana, before Aksana reverse her hip toss attempt into one of her own. Nattie boots Aksana in the breasticles with both feet before tripping her down as she attempts a Sharpshooter. Nattie is then whipped into the corner turnbuckle. She tries to float over Aksana, yet the European has finally learned something from being beat by Nattie all those times and she waited and then cut Ms, Neidhart’s left leg from under her.

Aksana tells the referee that Nattie is ok yet the ref wants to make sure everything is ok. Aksana has enough of waiting and kicks Natalya right in the injured leg before bending it around the bottom rope.

“I HAVE 5, SHUUUT UP”, says Aksana to the official as she goes back to work on Tal’s leg. Aksana then does her sexy slug crawl thing and this seems to get The Miz excited. Miz, you’ve got Maryse at home, steady on! Following a two count after a shin smash to the face, Aksana drops Nattie’s knee to the mat. Aksana then gets a little cocky and it costs her. After performing a second nifty little roll, Natalya is all set up for the Sharpshooter. Aksana tries to make it to the ropes, yet a fat lady has sung somewhere in the arena as Aksana taps out!

Thoughts: Although the outcome of this match was obvious without reading the spoilers, I still enjoyed it. The purpose of the match was to put Total Divas over and promote its cast member positively and it achieved the aim perfectly. Natalya sold everything expertly and the story within the match was as classic as it can get. The ending came out of nowhere which was unpredictable and a nice change from the normal style epic comeback, so I also appreciate that.

Aksana is someone who is really improving in her character and I have to give her credit. I still think her look needs serious work and is nothing compared to what she looked like with the blonde hair yet her in-ring presence is great. She is really beginning to perfect the goofy heel character and I hope we can see her do more with it soon. I’d love to see her pick up a win or perhaps be aligned with a superstar so that her character can evolve. Here’s hoping! And with that, stay tuned, Jack will be back!