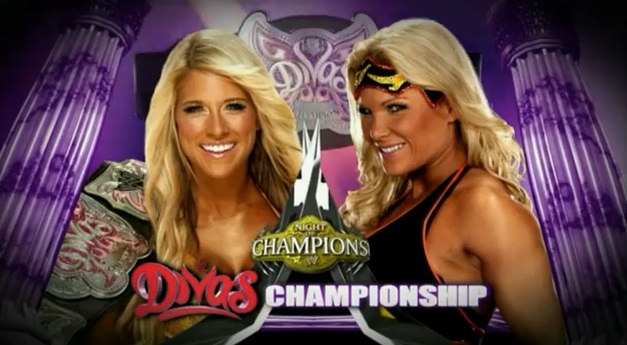 The Divas Championship is on the line tonight at Night of Champions when Kelly Kelly defends against Beth Phoenix in her hometown of Buffalo, New York. Can the Diva of Doom take the victory? Or will Kelly’s Cinderella fairytale live on? The Diva Dirt team weigh in…

April: I hate to say that the run the Divas of Doom have had so far hasn’t quite reached its peak yet, but I’m going to. I think maybe its a bit too early for the title to swap over. I’m going to have to say that Kelly Kelly is going to retain her coveted butterfly belt. I know most people seem to hate her but I’m a Kelly supporter. She’s come a long way since her ECW exhibitionist days and has truly proved she can hang with the beat of them. She wants to be a Diva, no matter her background is, and I think she is going to give Beth a run for her money. #team2k

Bobby: I don’t know where to begin with this. I think it’s been a pretty eh job of building to this match when there was so much time to capitalize on it. Storylines through Twitter aren’t really my thing, but props to the Divas involved for getting some type of story behind it. I thought there was a definite explanation for Kelly to retain at SummerSlam if it was through a roll-up, and they did just that… but I don’t see where it could go from here other than the hometown girl Beth Phoenix getting her moment tonight.

Cryssi: Logic dictates that Beth will walk away tonight with the ‘W’ but for some reason I just can’t make myself go with logic. Its probably my buzz speaking but I’m going with Kelly Kelly as my winner. She’s not even scratched the surface of her title reign yet and I don’t want it to come to an end.

Erin: The WWE hasn’t really met most fans’ expectations with this feud, so it makes me wonder whether this was really meant to change the division or just serve as one of Kelly’s title feuds. Still, it’s hard to imagine Beth, fully motivated and with a ruthlessness only found in heels, being beaten by Kelly. Natalya poses a threat as well, and I just don’t see the point in teaming those two up if you’re just going to have Kelly defeat them and move on. It may be wishful thinking on my part, but I’m gonna go with Beth Phoenix winning the match and the title and really starting to give the division a “makeover”.

Katelyn: For me, it seems unrealistic to keep seeing Kelly pull out cheap victories over Beth and Natalya – they’re clearly more powerful than the majority of the other Divas and they’re not stupid, so surely they’ve got to pick up a win at some point. A win in Beth Phoenix‘s hometown seems likely.

Melanie: Kelly Kelly got the victory at SummerSlam, as she should have done, but now logic dictates that Beth Phoenix gets the victory here because you can’t conceivably have Kelly beat the bigger, stronger Beth twice in a row in fluke fashion. To be honest, the build to this match has been weak as compared to the two-week build before SummerSlam. They could have done so much more with the Divas over the past few weeks. However, I think it’s time to deliver on this whole Divas of Doom promise by having them dominate the division as the top heels. It’s far more interesting to see the Divas of Doom with the Divas Championship in their position fending off competition from ‘underdogs’ than seeing them chase the title, I say. I predict Beth Phoenix takes the victory.

Steven: I think Night of Champions is the perfect time to pull the trigger on Divas of Doom and have Beth win the title tonight. I see Beth Phoenix winning tonight and feuding with the likes of Kelly Kelly and Eve for the time being, until WWE finds something interesting for them to do.

Who do you think will win tonight at Night of Champions?