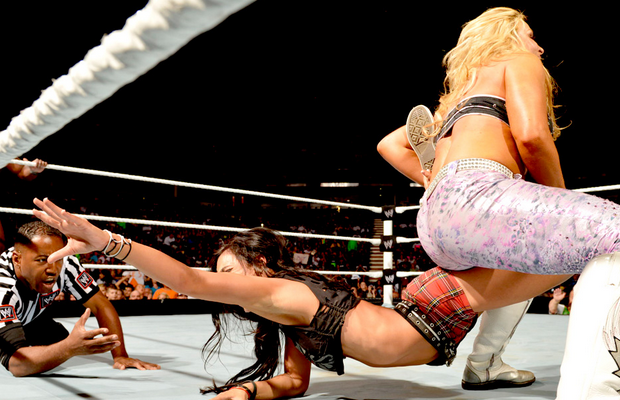 WWE referee Marc Harris has been the butt of internet criticism in recent days following the finish to the Mixed Tag Team match he officiated on Monday.

On Raw, Divas Champion AJ Lee teamed with Big E Langston to face Natalya and The Great Khali. At the end of the match, Nattie applied the Sharpshooter and AJ tapped out.

The referee seemed to miss AJ submitting, making for an embarrassing moment in which Natalya tried to get her hand raised. Natalya went on to apply her finisher once more and make AJ tap again to officially end the match.

Ref Harris has taken to his Twitter account to explain the mishap, stating the timing in which the submission was released was the reason behind it. In response to a fan, he tweeted:

@Lil_JB2 )no mistakes,submission was released before the tap out,so it was reapplied til the tap out. A great ref would pick that up & I did

We’re not going to put words into Marc’s mouth, but he seems confident that he made the right call. AJ, on the other hand, may be going crazy to think that she tapped twice!

Make your own decision on the incident by watching it again below:

Do you think the referee made the right call?