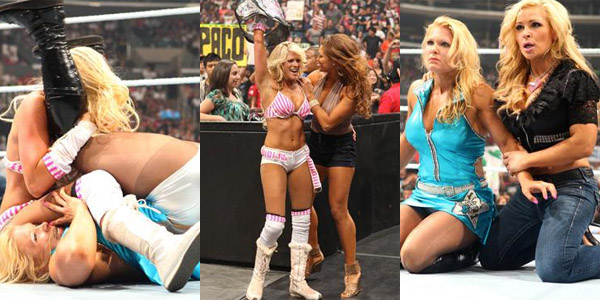 Going into last night’s SummerSlam, the odds favored the bigger, stronger, more powerful Glamazon, Beth Phoenix. Having branded Kelly Kelly a ‘blonde, little bimbo’, Beth had tormented Kelly both mentally and physically over the past couple of weeks — even aligning herself with a fellow powerhouse Diva in Natalya — but once the cameras started rolling, it was Kelly who shocked Beth, Natalya and even the fans by pulling out the victory.

With Beth involved and a good storyline build going into the event, I had high expectations for this match. Did it live up to the hype? Let’s find out…

Out first is the Divas Champ, K2, with her bestie, Eve, in her corner. Michael Cole adds: “Someone explain to me why Eve Torres is always around for a Kelly Kelly match?” Um, did you see the alternative? Lucky escape, Eve! If you weren’t in Kelly’s corner, you’d have to dance for Cee Lo!

Next out is Beth sporting a brand new look. Gone are the Glamasuits — a moment’s silence please :'( — and back in vogue are the skirts Beth once used to sport. Beth is accompanied by fellow Diva of Doom, Natalya, looking very cute in jeans and heels.

As Beth enters the ring, Kelly hoists her Divas Championship in the air showing that she is not afraid and ready for the challenge that is the Pin-Up Strong Diva.

The bell rings and it’s Kelly that is wasting no time, taking the fight right to Beth, a sign that she is not intimidated. Kelly runs at Beth with a flurry of forearms and stomps but Phoenix easily overpowers her, shoving her hard back against the mat. Kelly is undeterred however, getting right back on her feet and running at Beth a second time with forearm shots.

Beth reverses an Irish whip attempt and runs at Beth, who sticks her leg out to block any contact. Beth grabs Kelly’s foot as the champion hobbles for a moment before tapping into her gymnastic background with a backflip. The momentum of the backflip, however, sends Kelly hurtling into the ropes, staggering to remain on her feet.

Kelly ducks a clothesline and locks Beth into a headscissors takedown. This is pretty much Beth spinning around holding Kelly. Beth goes through the middle ropes, selling the headscissors with surprise and shock at Kelly getting the upper-hand on her. Before she has time to recover, Kelly applies a sort of ‘reverse tarantula’ from inside the ring as opposed to the apron, choking Beth out. Kelly runs the ropes and knocks Beth off the apron with force. The Glamazon stammers to the outside but before she can catch her breath, Kelly comes flying at her with a clothesline from the top turnbuckle. Great spot.

As the Divas get back into the ring, Kelly tries to maneuver Beth into a backslide but Beth is not budging. Beth tries to back Kelly into the corner, but Kelly uses her feet for leverage, climbing the ropes and backflipping over Beth. The momentum soon shifts, however, when Kelly walks into a hard clothesline from the Glamazon — to cheers from the crowd? Um, Beth is the heel.

It’s Beth’s turn to show off her talent now: her strength and power. She hoists Kelly up in the air in powerslam position, holding the position for a moment, and then guillotines her over the top rope. Ouch!

Beth goes for a pin attempt but only gets a two-count.

The Glamazon picks up Kelly and tosses her across the ring as the referee checks on her. Beth then chokes Kelly in the corner with her foot. On the outside, Eve eyes Natalya in case she tries to interfere and the two exchange words. Back in the ring, Beth runs at Kelly hitting a butt-bump on the Divas Champ and then adds insult to injury by mocking Kelly’s stinkface, again to much applause from the audience.

Another pin attempt by Beth followed by a chin-lock. Kelly slowly but surely rises to her feet with forearms, breaking out of the move, but Beth quickly takes back control with a shot to the stomach. Beth picks up Kelly and bends her over her shoulder in a torture rack-esque move, spinning around on the spot and applying even more pressure. The referee checks to see if Kelly wants to tap out but the champion is still in the game as Eve and the fans will her on with a clap. Kelly soon fights free from the hold and hits a reverse neckbreaker on Beth, however she’s still weakened and unable to make a pin attempt. The two Divas rise to their feet as K2 tries to fight off Beth with forearms but the Glamazon simply womanhandles her, hoisting her over her shoulder and hitting her with a running slam into the corner.

With Kelly in Tree of Woe position, Beth grabs Kelly by the hair, slamming her head against the bottom turnbuckle. Meanwhile on the outside, Natalya cries ‘Again!’ However, before Beth can hit a shoulder tackle, Kelly hoists herself up, rolling over Beth’s back and frees herself. Before Beth knows it, Kelly has her rolled up. Could she pull off the upset? Nope, Beth kicks out at two.

Beth is angered but before she can get her hands on K2, the Divas Champion comes at her with a flurry of forearms. Kelly uses the ropes for momentum but Beth manages to pick her up into a side-slam followed by a pin attempt but the resilient champion kicks out.

Beth takes Kelly over to the ring ropes, stepping out to the apron, and sets K2 up for a stiff kick but Kelly manages to get out of dodge before Beth can do any damage. Kelly sees her opportunity, guillotining Beth over the top rope and manages to take the Glamazon off her feet. This the part where Michael Cole should add ‘Vintage Kelly Kelly’, as the Divas Champ smashes Beth’s face repeatedly against the mat while letting out her banshee-like scream.

Forearms to Beth, positioning her in the corner. Kelly tries to crawl desperately to the other side of the ring, looking winded and weakened from Beth’s assaults. Big ‘Kelly’ chant as she goes for a handspring butt-bump but as she reaches Beth, the Glamazon has her well scouted and sets her up for the Glam Slam! The crowd is loud for the Glamazon as she seemingly has the match won but before she can hit the devastating move, Kelly manages to roll through her legs and applies a quick victory roll to steal victory from the jaws of defeat!

Kelly hightails it out of the ring as soon as she gets the three count, fleeing the Glamazon’s wrath.

Kelly celebrates with Eve as Beth looks on astonished by her loss and comforted by Natalya.

Despite all the intimidation, K2 walks out of SummerSlam still the Divas Champion.

Thoughts: I really enjoyed this match. The match was laid out perfectly, in my opinion. You had Kelly try to use her speed advantage to beat Beth, and you had Beth use her size/power advantage to dominate Kelly. That is how I pretty much envisioned this match working and that’s what they did. The match played on both Divas’ strengths, with Kelly using a lot of acrobatic/gymnastic moves to get out of Beth’s holds etc., while Beth just tried to clobber her down.

Kelly really gave one of her best efforts in the ring here with Beth. Working with a more experienced wrestler, Kelly was able to shine and be more comfortable in the ring. Beth led the match and anchored Kelly, as she should being the veteran, but the Divas Champion also showed a lot of tenacity. Kelly is always willing to take bumps and she had a few scary spots in this one. Her clothesline to the outside was very good, too.

The finish was, in my opinion, exactly the right thing to do here. Internet fans always seem to want to see instant gratification and they want to see Beth win, but story-wise, the right person won. We’ve only had two weeks of television since Beth won the battle royal. They should build this feud up more. I’ve been happy with the build that they gave this match in two weeks, so imagine four more weeks of build leading into the next pay per view? I expect Beth will win the title eventually, but it didn’t need to be last night and it shouldn’t have been last night.


Also at SummerSlam, as you might have guessed, musical guest = Divas as glorified dancers. That was the role played by the Bella Twins, Brie and Nikki, Alicia Fox and Rosa Mendes last night at SummerSlam.

I guess there’s no real need to nitpick over this because this was in addition to a match and not instead of one. Yes, it was silly and groan-worthy, but it was harmless. The Divas looked great in red, I thought. And hey, if I have to sit through Divas acting as glorified dancers, I’d rather listen to a song I like — ‘F**k You’ — than one I don’t.

I was, however, disappointed that there was no ‘Nikki B’ guest rap… “They ain’t got shit on me!”…

What did you think of SummerSlam? Did the Divas deliver? Tell us in the comments…