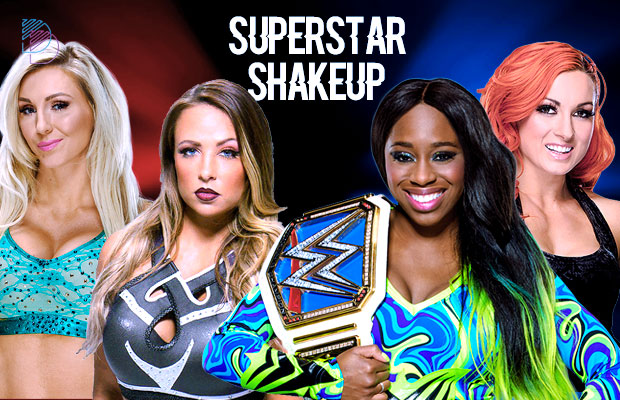 Last night Alexa Bliss, Mickie James, and Maryse joined the Raw roster. Tonight will cap off the “Superstar Shakeup” event, further changing the SmackDown roster as we know it.

What We Know So Far

Last night Nia Jax took down the queen herself in a blow off match. Could Charlotte Flair throw her crown into the blue brand’s ring?

Emma confronted Dana Brooke and tried to reform EnD. Dana, however, declined her offer and is now seeking to carve a niche out of her own in the women’s division. Maybe Dana finds a home on SmackDown where Naomi and Becky Lynch could push her to be the hero she could be?

Or could Evil Emma come back to reignite her long awaited feud with SmackDown’s top babyface the Lass Kicker?

Sasha Banks has her eyes on Bayley but now that Alexa and Mickie have arrived, is the boss being pushed out?

Could any new blood be on their way from NXT?

Follow Diva Dirt as we deliver live updates on which female talents will be appearing on each main roster brand.

The current rosters are as follows:

The land of opportunity just gained Tamina, Charlotte Flair, and an up and comer in Lana. Other Superstars that were swapped tonight include Sami Zayn, The New Day, Kevin Owens (contingent upon his upcoming match with Chris Jericho), Rusev, and more.