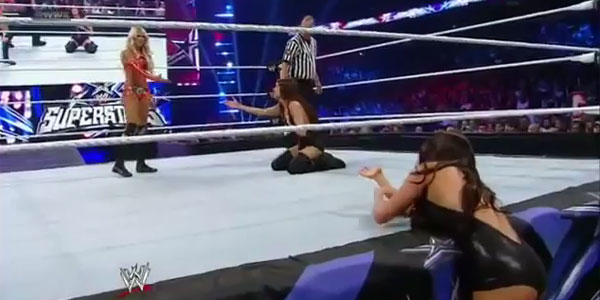 What up, errbody? (Yes, that is the only time I will ever intro one of the Reduxes like this.) Welcome to a fascinating edition of your Superstars Redux!~ I am your host, but you are the audience and thus you have the power to judge this week’s action as well. This week, we had Kelly Kelly fresh off her ‘Mania victory squaring off against Brie Bella of the seemingly controversial Bella Twins. It wouldn’t be a Bella match without the lovely Nikki out at ringside as well, but after Kelly helped her defeat our Divas Champion last week, where will her loyalties lie?! There’s only one way to find out…

We head to the arena as the Bella Twins are basically already on the ring apron doing their pose for the crowd. They step into the ring as “holla holla holla” blares out to the fans. Kelly Kelly then walks out in her fancy pink gear and receives a welcome reception from the audience, as the bell sounds and we start things with a lock up! Brie shoves Kelly into the corner and proceeds to level her with kicks in the abdomen. She tries to take the advantage, but K2 kicks her in the stomach and locks in the hangman style leg-lock!

K2 flips over the ropes and to the outside, before tripping Brie up and shoving her out of the ring as well. Kelly proceeds to slam Brie’s face repeatedly, as the two slide into the ring and Brie begins to plead with Kelly to give her a little break. Normally this fools nobody, but after they’ve begun to bond as of late, Kelly seems to let off. Brie offers a handshake, to which Kelly grabs her palm and shoves it to the ground! She then stomps right on her hand and as Brie lands bent over the ropes, smacks her in the butt with a spanking!~

Kelly then runs off the ropes, but Brie drops her with a nice Sidewalk Slam and lets out a coveted Nelson style “ha ha”. From there, Brie is pretty much in control with a few submissions, as she screams to the crowd how easy this is for her. Brie with a few kicks to the back, before locking Kelly into the ropes and pulling back with a submission until she is forced to break. Brie with a chin lock as the crowd starts to get behind K2 and she flips Brie over! Kelly with a nice thesz press and then scores with the whirlybird headscissors!

Kelly sets it up, and YES! Delivers with the handspring elbow. She splashes Brie with her patented stink face, before nailing a bulldog for a two count. Brie then knees her in the stomach and goes for the Bella Buster, but Kelly grabs both of Brie’s legs mid air and hooks a really awesome jackknife cover for the victory! She celebrates her win, as the Bellas try to regroup this sad defeat.

Thoughts: I’m going to be honest…when I first heard this match was taking place on Superstars I wasn’t excited at all. We’ve seen it a lot of times before, and I sort of felt like, no offense to either lady, it was kind of always the same match where Kelly started out with the advantage, and Brie would control the arm, only for Kelly to come back at the end and win. That being said, I actually really liked tonight’s match. I feel like they changed it up a little in their move sets to help make this bout stand out from all their past ones, and I loved Brie’s sidewalk slam into a coveted Simpsons style “HA HA”. Yes Kelly won with the dreaded roll up, but to her credit at least it was a fancy quick counter style one out of a Bella Buster! Kudos to both ladies on a fine match.

In regards to Nikki Bella, I’m not really sure what they are doing with her. There was that brief moment where she was trying to reason with Kelly not to attack Brie, and the twins never performed Twin Magic… but I kind of wanted more. I would’ve loved to see Brie slide out of the ring to do Twin Magic and have Nikki struggle with the thought of doing it since Kelly helped her win last week. I think that would’ve helped progress some sort of story better than this did, but it just seems like the same thing I dislike about Superstars matches in that all stories are off and it’s just a match happening for the sake of happening.