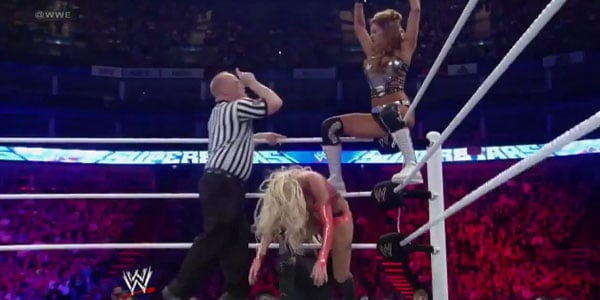 Holla, holla, holla to you all, and feast your eyes on another bountiful Superstars Redux. The Raw Divas division seems to have moved here as of late, and to be honest, I’m not entirely against it. This week, former friends turned foes, Kelly Kelly and Eve Torres square off in what was formerly a rumored match-up at WrestleMania until Beth Phoenix and Maria Menounos joined the mix. Can this top the bout we saw at Sun Life Stadium? I’m sure it will be filled with many a “Hoeski” chant, so let us see what else goes down!

The delightful peppy theme song of Kelly Kelly strikes, and out she walks in a cool fruit punch colored gear. The crowd gives the blond bombshell a welcome reaction, but not so much to Eve as… ahem, “SHEEEEEEEEEEEEEEEEEEE Looks Good To Me” graces our ears. Eve steps out and plays up to the crowd like the hellacious heartbreaker she is. I try to pay attention to Eve’s entrance, but it’s too hard as I can’t stop singing along to her tremendous theme song. The bell sounds as the first “Hoeski” chant of the night erupts. The two lock up with Eve backing Kelly into the corner and smacking her like she just trashed Eve’s family.

This does not set well with K2, sparking her to leap forward with the Thesz Press of her life! She unloads of Eve, until Torres manages to kick her in the stomach and control the match. Eve sends Kelly into the corner, but gets a pair of boots to the chest! Kelly transitions into a hangman’s leg hook neckbreaker, before tripping Torres up by the feet and then banging her skull into the hardest part of the ring (which does make me cringe a little). She leaves Eve in position and then runs into the squared circle and hits a baseball slide! Torres falls to the outside and Kelly makes sure to not let up.

K2 smacks Eve across the ring apron and ascends to the top rope. Kelly leaps off with a nice crossbody, but only gets a two count. Eventually, Kelly goes for a ten punch, however, Eve slams her off and gets a two count. Torres moves into a headlock, complete with some taunting to the british fans. They start to clap for Kelly, but Eve is relentless on her attack. She climbs to the second rope and proceeds to choke K2 out until the count of five. Eve moves back into her submissions once again, until Kelly can fight out with a nice arm drag! Kelly scores with an equally nice hurricanrana for a two count, before taking the advantage with a few punches. She goes for a third, but Eve drills her face first with a kickass faceplant for a near fall. Torres locks in the choke hold again, as the crowd continues to target Eve’s past.

Torres poses for the fans and goes for her running senton. Sadly for her though, Kelly gets the knees up and makes my own gluteus maximus hurt after seeing that sick counter. Kelly does not give Eve a second to breathe, planting her with a running bulldog and then a clothesline! She hits the whirlybird headscissors and follows it up with a handspring splash in the corner. Stink face follows suit to a pop from the crowd, but as she goes to pick Torres up, Eve quickly drops her with a roll up and applies her feet to the ropes for the victory! Eve celebrates the win over her former friend, as Kelly can’t believe someone would resort to such tactics in a match. For shame, Eve Torres, for shame!

Thoughts: Okay, I know in the past I have preached that I can’t get behind Superstars matches as much because there are no angles to set them up, but I will honestly say that I loved this match. Maybe it’s because their past has been established on Raw, but this felt like a very solid showing and didn’t slow down or get messy in the slightest. Eve Torres is a bajillion (is that a real number?) times better as a heel, and this match showed me that she’s grasping the move set as well now. I was worried when the two locked up on Raw that Eve was so used to being a face in the ring, considering a lot of her move set consisted of flashy flips etc. that she didn’t seem as well in the heel role ring wise at that time. After this showing though, I think she is definitely picking it up. She wasn’t too reliant on submissions and rest holds, and was still able to incorporate some of her past moves without coming off as a face.

Not only that, but Kelly was better here as well. She did do most of her signature stuff, but for some reason I liked how it came off tonight. One spot she did that I really enjoyed was how she switched it up after the hangman’s neckbreaker and proceeded to slam Eve’s head on the ring apron and go for the baseball slide instead of just pulling Eve out like she did to Brie the other week. Even though it made me cringe to see Eve’s face bashed against that after hearing how it’s the hardest part of the ring, I still thought the spot was a welcome change of pace and came off great. All those matches on house shows seem to have paid off for the two as they definitely delivered in my opinion.