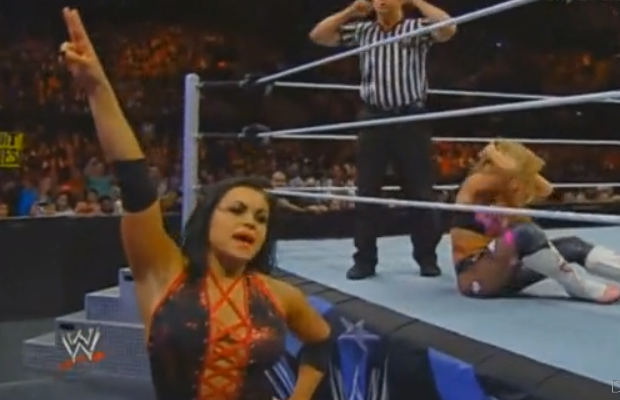 What’s up Diva fans and welcome to this week’s WWE Superstars Redux. Just like the last three weeks on WWE Superstars, I can happily tell you that a Divas match was taped – hooray! However, just like the last three weeks, the match was near impossible to find – boo! However, just like always, some amazing individual on the world wide web has finally been a saint and uploaded the match – hooray! All of this booing and hooray-ing has reminded me that it’s pantomime season and I’ve gone all cold as I just remembered I hate pantos.

What do you mean it’s behind me? And don’t say it’s Tamina in all her leather. I’ll have nightmares like I’ve just ate a mile long string of cheese…

Moving swiftly on, it gives me great pleasure to say that this week’s match was pretty awesome. We got to see a relatively fresh singles match pitting Aksana against Natalya. These girls are like chalk and cheese; one is sub-par in the ring yet is coming into her own in the personality department; the other is the most technically gifted Diva ever to step foot in a WWE ring yet isn’t the most natural talker. Can both work on their weaknesses in this match? Let’s dive right in!

Out first this week is Natalya, who is beaming with happiness. Judging by her recent amount of crying, I’m not sure why but maybe it’s because she knows she’ll win tonight, she’s against Aksana. Speaking of Aksana, out comes the Lithuanian minx and right off the bat, she’s toying with the crowd.

The match starts with Nattie tripping Aksana and working on her leg. Aksana uses her calf (no she hasn’t brought a live young animal to the ring) to push against Natalya’s throat but Natalya regains control by contorting Aksana’s lower legs, which she accentuates with a spank. Aksana breaks out and I lose interest slightly at this point as

MARYSE IS REFERENCED ON COMMENTARY!

Back from marking out, Aksana has Tal in a side headlock, which the Dungeon Diva eventually gets out of before shoulder blocking Aksana. Natalya continues to display her athleticism with a flip over Aksana and a bridging pin. Frustrated, Aksana goes outside to seemingly catch a breather yet judging by her shouting at the crowd, I don’t think she’s too bothered about getting her breath back and focusing. Nattie capitalises on Aksana’s lack of focus with a baseball slide yet somehow, Aksana rebounds back, shoving Natalya into the barricade as Nattie was walking
up the ring steps. Aksana pushes Natalya back in the ring before telling the audience that she’s the best before telling them all to “shut up!”

Back in the ring, Aksana goes for the pin yet only manages two. Alex Riley then says that “it’s been a long time since Aksana was in the Divas title picture… if not ever.” Get it right Alex, that’s never going to happen! Aksana tries to prove me wrong by hitting a series of elbow drops yet those also aren’t enough to get the. Aksana works on Nattie’s head and neck on the ropes and then yanks Natalya about 3 inches in the air from off the ropes; somehow I don’t think that was too effective! What was relatively impressive though was the bow and arrow style submission Aksana utilized on Natalya next. Aksana elbows Natalya right above the hip and then very nonchalantly covers the former Divas Champion. Aksana then pushes Natalya against the ropes before shoving her to the ground.

Aksana mocks the audience some more and her cockiness nearly comes back to bite her as Natalya hits a sneaky schoolgirl. Aksana kicks out and fights back with a clothesline. Aksana then uses the single leg crab she debuted on Main Event, which Natalya sells like an Oscar winner. Tal eventually pushes herself out of the submission, yet Aksana keeps in control by ramming Natalya into the corner. Aksana then hits a reverse ‘Eye of the Hurricane’, and yes I did just reference The Hurricane of all people.

Aksana poses on top of Natalya yet again before slithering about the ring, apparently like Catwoman. I see no resemblance to Aksana and Selina Kyle whatsoever! If Aksana was Catwoman to my Batman, I’d be a disappointed Bruce Wayne. If anything, Aksana is more like a Talia Al Ghul. I digress…

Aksana goes to kick Natalya like she always does after her ‘Sexy Crawl’ yet Natalya grabs Aksana’s shin, backrolls over and manages to lock in the Sharpshooter. That fantastic counter allowed Natalya to pick up the win!

Thoughts: Let’s discuss the match first, which I think went very well. Aksana’s physical selling is sloppy at times yet overall, this match really entertained me. The sexy crawl reversal at the end had me howling with laughter and I thought it was so unique. Props to the girls for coming up with that and the interesting outside momentum shift.

Now onto individual performances. Regular readers of my Reduxes will know that I am not Aksana’s biggest fan yet I’m going to say it. Aksana really impressed me. Notice the emphasis on the bold font. Her character was more over-the-top and animated than ever, which is great to see. Aksana should have already been at this level ages ago yet at least it’s finally nice to see her really owning her self-absorbed comedic character. Her ring work wasn’t outstanding yet I do appreciate her adding new moves into her arsenal, in particular the Hurricane Helms style reverse cutter I mentioned earlier.

Natalya is not always the most entertaining character yet she worked the crowd well tonight. The reaction she got when she nearly won with the schoolgirl shows how popular she is and she definitely made me feel bad for her when she was locked in the single leg crab. Even if she was just flicked on the forehead, Natalya could sell it amazingly and act like it was excruciating. Now she just needs to figure out how to sound a little more believable. You never know what might happen in 2014!