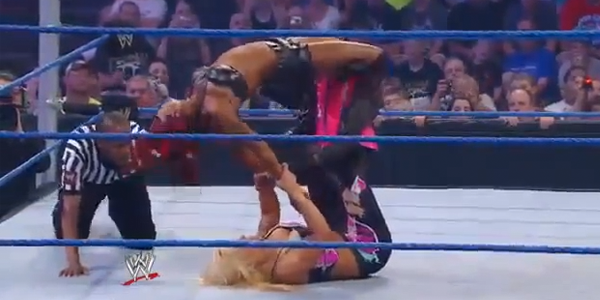 There’s been a bit of a large feud going on between the Divas of Smackdown, providing for a wide variety of matches. It seems that, in the past few weeks, the heels have been getting the best of it, thanks in large part to Alicia Fox and her ability to pull out a quick win. The feud continues this week with a rematch of a bout from two weeks ago, pitting the aforementioned Ms. Fox against Natalya:

There’s some trashing talking pre-match, and Alicia gets the first hit in with a shove to Natalya. She then wags her finger in her face, prompting Natalya to shove her back. This shove has a bit more oomph to it, and sends Alicia flying across the ring. Alicia charges at her, but Natalya flattens herself to the mat. Alicia leaps over her and runs the ropes, but on the return Natalya grabs her ankle and trips her. She twists over Alicia’s back, quick as a cat, and latches on a front face lock. Alicia gets to her feet quickly and powers her way out of the hold, twisting Natalya’s arm behind her back.

A few well-placed elbows to the face allow Natalya to reverse the hold and get a grip around Alicia’s waist. Alicia flails, trying to free herself, but Natalya’s got a vise grip. Alicia manages to get to the ropes and holds on to them for dear life, but Natalya comes away with a souvenir: Alicia’s belt. She taunts Alicia with it, causing her to run in for an attack. Natalya ducks it and hooks her into another front face lock, this time hitting her with a delayed suplex, leaving her hanging upside down for several seconds. Natalya goes for the pin, but Alicia kicks out after the 2-count.

Natalya grabs Alicia by her feet, standing on the back of her legs, wrenching back her arms, and pulling her into a Mexican Surfboard submission. Alicia hangs high in the air, but Natalya’s own hold leaves her shoulders flat on the mat, and the referee counts for a pin. She quickly sends Alicia back to the mat, keeping the hold intact but placing her shoulder to the mat instead. The referee begins to count, but Natalya’s shoulders are still on the mat, so the pin is broken. Natalya relinquishes the hold.

Alicia reverses an irish whip into the corner, but when she charges Natalya uses leverage from the turnbuckle to leap over her, hooking her into a schoolboy pin. She gets a 2-count before Alicia kicks out. The two jockey for control, trading vicious slaps that Natalya seems to get the best of when Alicia seeks refuge in the corner. This draws Natalya over, and when she’s close enough Alicia hits her with an elbow to the face. She tosses Natalya into the corner and kicks her in the stomach, going for a scissors kick. Natalya stops the move mid-way, though, catching Alicia’s leg behind her head and dropping her to the mat, fighting for control as she tries to lock in the Sharpshooter. Alicia, taking advantage of Natalya’s distraction as she tries to hook her legs, grabs her by the hair and rolls her into a pin attempt, which earns a 3-count and the win for Alicia.

Thoughts: Surprise pins are nothing new, and they’ve seemed to be used a lot recently, even in the last match between these two. In that one too, Alicia thwarted a Sharpshooter attempt for a roll-up pin. Hey, you can’t blame a girl for using the same strategy twice if it’s working! This was a pretty short match by WWE Superstars standards, especially when compared to the 10 minutes they got two weeks ago, but Alicia and Natalya really made the most of it, packing those precious minutes with a lot of exciting action. Neither seemed to get a moment to catch her breath, and a few spots were quite unique for Divas matches, especially the Mexican Surfboard and the scissors kick block. It’s a common complaint that Divas matches are too short, but this match it proof that you can milk some great action out of a few short minutes. It just takes two capable Divas and a decent short story to tell.