WWE Superstars Redux (May 3rd, 2013): Tamina Once Again Fails to Make a Statement 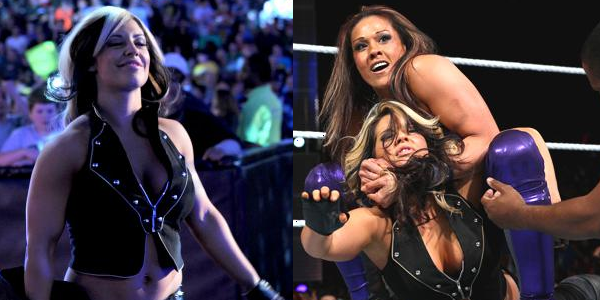 What’s up Diva fans and welcome to this week’s WWE Superstars Redux. The ‘statement maker’ herself Tamina Snuka is in action for the third week running on the ‘Mike Adamle > Tony Dawson’ brand and she’s looking for her first win in a while. Her opponent is going to be tough though, in the form of the woman who pinned her in a tag team match on this show last week, the Divas Champion Kaitlyn. Will Tamina finally make that statement she has so desperately wanted to make or will Kaitlyn’s self-esteem get even higher? See what I did there? Her theme song is called Higher… Yeah, let’s move swiftly on – I can’t wait to see a statement be made!

Out first this week is our reigning Divas Champion, the woman who personifies growing from a caterpillar into a tremendous two-tone butterfly! Tony Dawson butchers one of Matt Striker’s quotes from last week, which is no surprise as he is completely awful at commentary and clothes. Have you seen that he always wears like bright blue shirts with fluorescent yellow ties? I’ve had more visually pleasing vomits! Enough of my personal vendetta against someone so incompetent – it’s time for Tamina’s entrance! That segway sounded like I was linking the two, and well… Tamina’s here – woo. I need to stop digging this hole!

The match starts with the two Divas locking up before Kaitlyn’s gets the better of the exchange by applying a side headlock. Following a headlock takeover, Tamina tries to get out using heel-ish tactics in the form of hair pulling, yet Kaitlyn is having none of it. The girls both reach a vertical base and Tamina reverses Kaitlyn’s advantage with a wristlock which she transitions into a headlock of her own. Kaitlyn looks like she’s going to power out but then Tamina regains the upper hand by wrenching out Kaitlyn’s hair. I’m now beginning to get flashbacks of Aksana‘s 546 hour headlock on Kaitlyn that one time on Smackdown but thankfully, Tamina releases her grasp and decides that a stiff club to Kaitlyn’s back would be a better move in her arsenal.

Tamina whips Kaitlyn off the ropes yet the latter slides through her Samoan opponent’s legs and trips her up. Kaitlyn slows the pace once again with a front facelock yet Tamina counters the slow pace with her power game – ramming Kaitlyn into the corner. The Superflyer sits her rival on the top rope and goes for a superplex yet Kaitlyn shrugs her off. Tamina isn’t down for long though as she leaves Kaitlyn hanging out to dry on the top rope and delivering a clothesline, giving her rope burn to the neck and trauma to the back of her head. Matt Striker does a great job in explaining how the top rope is tied tighter than all the others, putting over Kaitlyn’s pain.

Tamina goes for the first cover of the match, and she nearly gets the win, yet not quite. Jimmy Snuka’s daughter then hits double hairpull takeovers in quick succession., whilst taunting to the crowd in a way I’ve not seen her do before – nice. Tammy then locks in a one armed camel clutch, which made for the beautiful photograph you see at the top of the page – Kaitlyn looks comfortable! #sarcasm Kaitlyn forces her way out of the submission and Tamina tries to keep pressure on with a hard shot to the ribs, yet it doesn’t quite work as the pair end up on a level playing field after clashing heads.

Kaitlyn is up first and that hit to head has definitely charged her up! The Champ hits an elbow-clothesline-elbow-shoulder tackle combo before leveling Tamina with a reverse DDT, that gets her just two. The Houston, Texas native then locks on her aim and goes for her Spear, yet Tamina halts her in her tracks with a stiff knee lift. Tamina continues to pummel the champ with an elbow and a leg drop, just showing how quick the tide can turn. Tamina then goes for her patented Samoan Drop yet the tide turns so quick yet again and Kaitlyn rolls up Tamina up for the three!

Thoughts: Yet another win for Kaitlyn and another loss for Tamina. That sums this match up really. It was nice to see the girls have some action this week and I’m all for seeing them wrestle and getting some time in front of the live crowd, yet when you’ve seen this match so many times and yet again there is nothing that makes it stand out, it gets stale. What I did like was Tamina’s taunting to the crowd though. She has never been so aggressive towards them before and it has definitely been a component that she has been missing, so it’s fresh to see that she is still learning and she IS getting better in the character department.