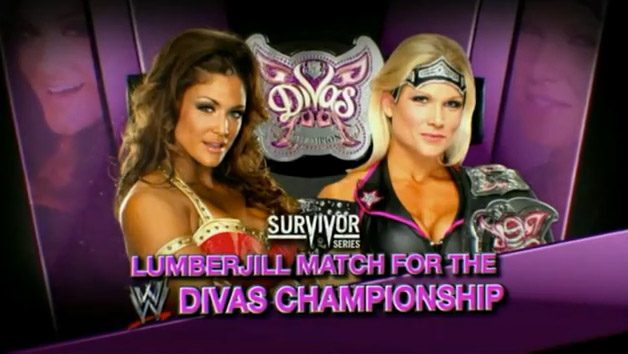 It’s round two tonight as Beth Phoenix once again puts the Divas Championship on the line against Eve Torres. Can Eve exact some revenge or will Beth’s reign continue? The Diva Dirt team weigh in…

Bobby: Well, to start, I absolutely hate that this became a lumberjill match and it wouldn’t surprise me if WWE executives thought to themselves “Wow, Eve and Beth put on such a great match at Vengeance…we can’t have that happen again so let’s make it a lumberjill match out of nowhere”. Nonetheless, I hope the two can put on the same quality of match with all the Divas at ringside. I’m going to be honest when I say that I’m personally not enjoying Beth’s time as champion, and I would love to see Eve get an actual reign with the title. Who knows whether or not WWE would give it to her. Personally rooting for the philanthropic, Rubik’s Cube solving Eve Torres to win, and I hope the lumberjills don’t cost her by accident.

Cryssi: I’m 50/50 on this, it could go either way. They’ve done nothing with Beth as champ, and both times Eve was champion, they did nothing with her. I think we’ve reached the point where the Divas are forced to linger in limbo. They had a hot few months, but now it’s just kind of stopped abruptly. They’re getting their random two or three minutes here and there, but that’s it. It sucks and it’s sad. And when so little effort is put forth, a title change could just happen to happen. I’ve got to pick a winner, so I’m going with the Beth Phoenix, hoping an eventual feud between herself and Nattie manifests, but if Eve wins, I won’t be shocked.

Katelyn: Beth Phoenix. Eve, Kelly & Alicia have proven to be a strong force thus far but I still see the Glamazon picking up the win, probably with the aid of Natalya.

Melanie: This has the potential to be a great match to follow up the bout at Vengeance, but with the lumberjills at ringside, I doubt it’ll live up to its predecessor. I really feel like the lumberjills are being added to make the match more “girly” and less technical like their match at Vengeance. They want to see the girls pulling each others’ hair in high heels and such, and then do the big predictable brawl with all the girls at the end. Sigh. However, I think Beth Phoenix will win.

Who do you think will win tonight at Survivor Series?