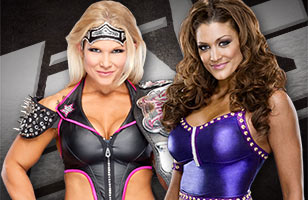 Will the division-wide dominance of the Divas of Doom end tonight? We’ll find out when Beth Phoenix puts her Divas Championship on the line against Eve Torres. Who will win? The Diva Dirt team weigh in…

Bobby: I’m really torn on how this would go. It seems very abrupt to place Eve into the title feud, especially when they didn’t even announce Kelly’s rematch was her rematch until after it had aired (and it somehow became a title match out of the blue). I could easily see Eve taking the win here, but I think they would try to build her up a little more than just a week, so I’m going to say Beth Phoenix retains here tonight and these two continue on to Survivor Series.

Cryssi: It’s crazy but given Eve’s history in title matches it wouldn’t surprise me to see her win tonight, but… I have feeling. And what that feeling is telling me is that somehow, whether it be intentional or not, Kelly Kelly will cost Eve the title. Beth Phoenix will no doubt walk away with the title still in her clutches.

Erin: This match seems like a necessary step towards Beth’s full dominance over the Divas division. Simply defeating Kelly wouldn’t make the Divas of Doom look as powerful as they need to be, and I think Beth needs to defeat as many of them on the big stage as possible. That’s not to say that Eve is merely a stepping stone (though the two-week build-up doesn’t really help her seem like a legitimate threat), but the only way I see her winning the Divas Championship tonight is if the WWE wants to really shock fans and derail the Divas of Doom storyline. I just don’t see that happening, so I say that Beth Phoenix will win and retain her title.

Melanie: I think the outcome of this match is pretty clear cut. I don’t see Beth losing the title so soon. Looking back at Eve and Beth’s last encounter on Raw, where I felt the chemistry was off, I hope this match will be an improvement and they find their groove together. An interesting factor could be what role Kelly plays in the match. Could she attack Beth, and end up costing Eve the belt? I predict Beth Phoenix wins.

Steven: After 3 PPVs in a row of Beth vs Kelly, Eve finally gets a crack at the title. I think we can all agree that this came out of nowhere. For that reason alone, I’m thinking that Beth Phoenix will be retaining tonight. Expect to see Kelly Kelly get involved to act as a foil to Natalya, or possibly costing Eve the title.

Who do you think will win tonight at Vengeance?