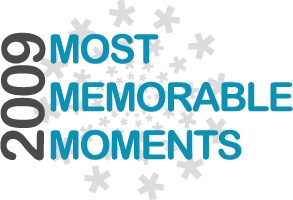 Today’s pick is from Erin: “Santina” Marella and Vickie Guerrero‘s Hog Pen match for the Miss WrestleMania crown at Extreme Rules was memorable for all the wrong reasons, but in my mind, it successfully (and probably most accurately) encapsulates the disappointments Diva fans experienced in 2009. From Santina, whose “debut” at WrestleMania lead to one of the most blatant misuse of Divas ever to Vickie Guerrero, the woman who we can only guess takes the endless pig jokes and pies in the face in stride for the paycheck, this match was chock full of what is wrong with the treatment of females in the WWE. Yes, the match was meant to be slapstick fun–they were wrestling in crap next to pigs, for God’s sake. Still, knowing beforehand that a match is going to be crap doesn’t lessen the second hand embarassment at witnessing it–just ask anyone who saw the Sharmell/Jenna Marasca match. Seeing Chavo Guerrero reduced to tossing around Santino in drag was horrible enough in itself even before Vickie got physicially involved, and seeing all three covered in mud (or shit, not sure, but I wouldn’t be surprised) by the end of the match kind of said it all. No matter how horrible and ridiculous the match and the entire angle was (and we all know it was), you won’t be able to wipe mental image of Santino in a pink skirt pinning Vickie in a mud-filled pit any time soon. In my book, that means it was something memorable. Granted, it’s not something that we wish to remember–more likely we’ve tried to scrub it from our memories–but it manages to stay alive like a pesky cockroach.

Share your memories of this moment in the comments!