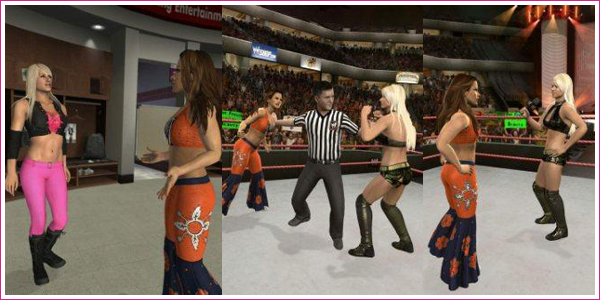 Six new images from this year’s SmackDown vs Raw game have been released featuring Kelly Kelly, Maryse, and Mickie James. In the shots, we see what appears to be a backstage encounter between Mickie and Kelly, as well as an in-ring promo involving Mickie, Maryse, and the Miz. Mickie’s model is showing some nice emotion, but I can’t say the same for Kelly’s. She kind of looks like the ceiling eyes chick from the Hills. You win some, you lose some. SD vs. Raw 2010 goes on sale Oct. 20th in the US, Oct 22nd in Australia, and Oct. 23rd in the UK.

Check out the full-sized photos by clicking the thumbnails below: