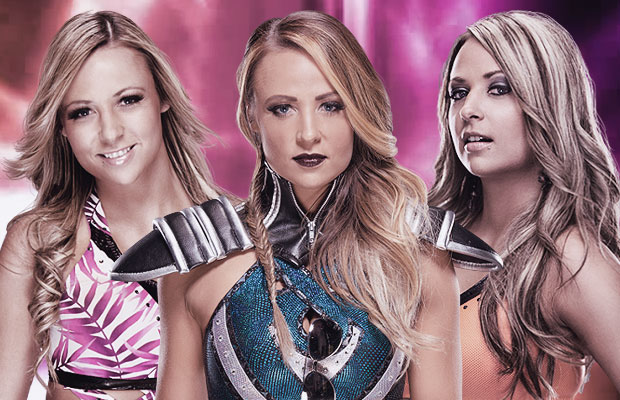 Emma was on a roll earlier on this year. After returning to the main roster for a great match at Wrestlemania 32, the Australian Superstar soon aligned with Dana Brooke in what looked like a promising run. But then, injury hit and a rising Emma was soon shelved for months on end to heal.

However, the former bubble-loving dancing queen is gearing up for her return! And it could go in many different directions. So, before her official comeback takes place, here are 7 fun options (though some do link) for our favourite Aussie to get her hands on!

With the traditional 5 on 5 Elimination match taking place at Survivor Series next month, both brands will need some ladies to fill up their spots. And for the potential that we’ll be seeing more than one match with the women on the night, there could be some extra spots to fill that the current roster cannot manage. So what way to kill three birds with one stone than to put Emma on both teams and subsequently push her?

In the coming weeks, the promoted Emmalina can make her way to her designated spot on Monday Night RAW, aligning herself on the red team for Survivor Series. And then, after a week or so, a returning Evil Emma (or the Dancing Queen!) can appear on SmackDown Live to team up with the ladies of the blue brand. And of course, she’ll be forced to pick one team on the big night (probably RAW), and turning out to be a heel on the show she turns her back on.

This can allow Emma to sort of play on the whole Corporate/Demon Kane gimmick by playing two completely different characters whilst allowing herself to get over on more than one show. Though this may require a lot more travelling than the other Superstars, if Emma could have less house shows in place of her two televised appearances, this could potentially be a pretty funny gimmick that many audiences can get behind.

The last time we saw Emma, she was teaming up with RAW’s Dana Brooke. The two were on the verge of running the division until an unfortunate injury forced Emma to leave and for Brooke to team with the then RAW Women’s champion, Charlotte.

And as she comes back, Emmalina takes back her tag partner and aims to rule the division. Following this, Emmalina and Dana can team up and feud against Charlotte. And by using Charlotte’s excessive heat and her poor treatment of Dana, this can potentially allow Brooke and Emmalina to fight as underdogs and get somewhat over with the crowd. This will also force another lady to be in the title picture before the inevitable NXT TakeOver: Brooklyn repeat takes place at Wrestlemania 33.

During their (potential) Hell In A Cell match, a frustrated Dana Brooke loses cleanly to the lovable underdog Bayley. And after a jealous post-match beatdown of the fan favourite, out comes Emmalina to confront her former buddy. And with shades of the Bella Twins at SummerSlam ’14, Emmalina turns her back on Brooke and allows Bayley to be saved.

And to take it one step further, Emmalina can beat down Bayley to reclaim her heel schtick and form a triple threat feud for the next pay-per-view.

After a successful title defense by Becky Lynch, a familiar tune blasts through the SmackDown arena. And of course, out comes a returning Emma with her shoulder pads, sunglasses and gloves to show. Lynch, weak from her tough title contest, is stood in the ring as Emma takes control and knocks her out. She then takes hold of the microphone and announces that she’s back, and ready to take what should have been hers – the title.

For the next few weeks, Emma terrorises Becky and ends up dethroning her as champion, allowing the chance to really solidify herself as someone to be taken seriously.

After her inevitable win at Hell In A Cell, Sasha Banks calls for a new opponent the following night on RAW. Following a short silence, a new tune pops up and out comes Emmalina, camera/phone in hand, documenting each step of her entrance in the form of a selfie.

Emmalina is then given a microphone and remains playful in her speech. She talks about how well Banks did at Hell In A Cell and how she has “made history” (because that line is inevitable), but as a grateful Sasha is smiling, Emmalina quickly knocks her down with a punch and inserts her new finisher. She’ll then accept Banks’ challenge and, before leaving, Emmalina will take a selfie with her beaten down opposition.

And if she can go forward with the split personality gimmick, how great would it be to have Emmalina as the RAW Women’s champion whilst Emma could be the SmackDown equivalent?

With the sixth season of the show so close to airing, there’s no doubt that storylines advertising the programme will be placed on WWE programming. And with Emmalina’s gimmick, this could be the perfect way to put the character over, as well as the show.

This can start off as Emmalina will return and bring up the show returning for its sixth season. But after a quick plug, she reminds everyone that she isn’t on the show, but she very much deserves to be.

Every week, in typical RAW fashion, she ends up squashing local competitors as a way to “prove” that she is better than any other woman and belongs on the reality show. But after a few weeks of the same thing, a current (or former) member of the programme such as Lana or Alicia Fox calls her out and offers her a chance to appear on the show. The only catch is that she would have to beat them in a match that will take place at either Roadblock or Survivor Series.

Though this isn’t the best way to make her the most serious of competitors, it could be a pretty cute and funny piece of television. Emma did a great job with her dancing gimmick a while back, so maybe another playful run will be fairly entertaining also?

With all the talk on RAW about the likes of Charlotte, Sasha and Bayley revolutionising the women’s division over at NXT,  a few names tend to be left off that same list. Though the opportunities weren’t quite as big as the work of the Four Horsewomen, women like Paige, Emma and Summer Rae did pave the way beforehand.

So, on the Monday following Hell in a Cell, Sasha and Charlotte will be seen discussing their historic match and how far the evolution has come. And as they go on, a rage-fuelled and jealous Summer Rae struts to the ring to remind them that there are more than just two or three women on the red brand. Rae continues to bring up past matches – as well as her time leading the BFFs – to remind her fellow NXT alumni that they aren’t the only women that came from there. And to further her point, the former First Lady of NXT will introduce another woman that shined on the yellow brand, and that woman is Emma(lina).

Emmalina soon takes hold of the mic and says that before there was a Sasha Banks, a Charlotte, a Bayley or a “Four Horsewomen” stable that never actually existed, there was an Emma, a Paige and a Summer Rae. For the next few weeks the women will fight to prove their dominance through mic segments and single/tag matches, with there being an equal balance of wins between the two sides. But along the way, the reminder of the upcoming Survivor Series match will hit, and with Paige out from an injury, this will eventually lead to RAW choosing Emmalina, Summer, Sasha, Charlotte and Bayley to team together to defend the brand’s name.

What do you think of these ideas? Do you have your own? Let us know your views in the comments below!