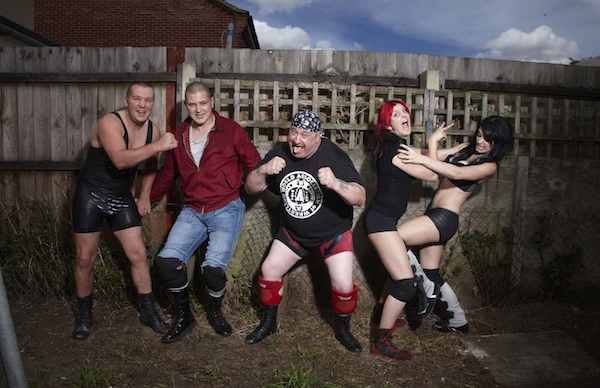 The Wrestlers: Fighting With My Family
Tonight, 10pm on Channel 4 (UK)

Focusing on the clan in a transitional time in their lives as young prodigy, Saraya-Jade aka WWE’s Paige (formerly Britani Knight), and brother Zac, are on the radar of the biggest wrestling company in the world, WWE, Fighting With My Family chronicles he lead-up to Saraya-Jade’s departure for the US to compete for WWE.

From her tryout, to getting signed by WWE, and eventually moving to Florida, Saraya-Jade is a key focal point. The youngest of the Knight clan — the princess, as her mother Julia (Saraya Knight) admits — Saraya-Jade’s departure from the household is bound to leave a hole. The documentary conveys the different emotions felt by her family members as she prepares to start her new career; her mother, like most, protective; her father seemingly wanting to live vicariously through her; and her brother, Zac, feeling left out and a tad jealous as he is unable to join her in WWE.

The documentary paints a larger-than-life picture of the Knights: a family of five, all wrestlers, with wild personalities. It’s easy to see why Channel 4 would be interested in the family, but there’s always a danger of being portrayed in a negatively stereotypical way as we have seen from the likes of Big Fat Gypsy Weddings, The Only Way is Essex and more. Indeed, Fighting With My Family, which makes a point to note that the family live in council housing, has its lewd and crude moments including a questionable scene featuring the Knight matriarch spraying (what I believe is) deodorant to the crotch. The documentary doesn’t help transform the often lowbrow perception the general public may have of wrestlers.

Fighting With My Family‘s most honest moment comes at an airport send-off for Saraya-Jade as she leaves for Florida. Her mother, Julia — who we most associate with the tough, brutish character portrayed in SHIMMER — lets her guard down in a flood of tears. This highly emotional scene is perhaps the most empathetic of the documentary.

Of the cast of characters, Julia certainly comes across as a doting mother fiercely protective of her cubs; an endearing side to the wrestler. More endearing, perhaps, is young Zac, whose story of struggle trying to get into WWE provides a unique parallel to Saraya-Jade’s rise to fame. Meanwhile, the FCW Diva is perhaps the most difficult to work out; ready to leave behind the UK for the “glitz and glamor”, she says, the youngest of the clan also seems reluctant, speaking of WWE “owning you” and not wanting to let her business-minded father down. Couple this with her mother Julia referring to her as a ‘product’ and her father thinking of all of the shows that they can sell out upon her return, there is more to Saraya-Jade’s psyche that could’ve been explored, it seems.

All in all, though interesting to get a behind the scenes look at Saraya-Jade’s signing with WWE, and endearing to see Zac’s story, the documentary feels self-serving and lacks poignancy compared to other recent wrestling documentaries, such as Betty M. Park’s Mamachas del Ring. While sympathetic to a family whose daughter has moved continents, the hardship doesn’t seem as resonant as the personal conflict and anguish in the life of Mamachas‘ lead character, Carmen Rosa. Additionally, the documentary lacks the wider perspective of a Mamachas, which shed a light on social injustice, or the recent GLOW documentary, which contrasted the glitz and glamor of the ’80s series by showing the toll it has taken on the performers today, such as the unforgettable image of a bedridden Mt. Fiji. Perhaps better served as a reality show pilot featuring outrageous characters rather than a thought-provoking documentary, Fighting With My Family often feels misguided, but if you’re a wrestling fan, it is an interesting look behind the curtain, as it were.