Against All Odds In Review (February 13th, 2011): What a Killer Disappointment… 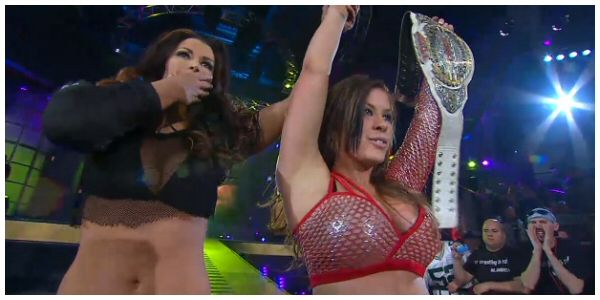 (This is Cryssi posting on April’s behalf. Everything was written by her!)

Hello my lovelies! It is that time of the month again, when all the frustration has built up and it’s finally time to settle the score. This feud between the two key Knockouts featured on the Against All Odds card has been rocky, to say the least. They’ve battled back and forth, knocked each other out, knocked themselves out and yet still, the TNA Knockouts Championship has yet to change hands. Whether it’s an interference from the veteran bodyguard or focus on the tag team titles, it seems the Knockouts title is put on the backburner far too often. But not this time. Ladies and Gents, we saw a Last Knockout Standing match and well….we might as well get to it.

In normal pay-per-view fashion, we start out with a backstage interview with the number one contender, Mickie James. She is seen standing with the lovely Christy Hemme, who definitely impressed me with her chic look. As for Mickie, or should I say Pocahontas, not so much. For those just watching, you will see what I mean momentarily. Christy tells Mickie that she must be excited going after the belt and Mickie says that tonight is her night. The only thing standing in her way is a mouthy, bratty little bi…chump. She makes a very good point when she says, the only reason Madison Rayne has that belt is because someone laid down for her. Mickie also warns that tonight, when Madison lays down for her, she won’t be getting back up. Meow! Time for the recap video package!

HARDCORE COUNTRY! And here we go! Bounding down the ramp first is the challenger, Mickie James. See what I mean about that outfit? I’m wondering how many innocent cattle had to die to make that outfit. Maybe if she wins, we’ll get a rain dance. Sorry. I keed. Her opponent is out next, in a brand spankin’ new…colored..outfit. SHE’S A KILLER QUEEN! Well, I wished for Madison to get a new outfit with that bonus check and I guess I should be careful what I wish for. It’s a new color, still the same beer wench attire. However, she believes she’s fabulous so who am I to rain on her parade? I’ll leave that to Mickie and her tribal dancing. Madison makes her way to the ring, glove on hand with her crown and sash combination. She gives her newly patented princess wave to the crowd and takes her time getting in the ring. Mickie isn’t impressed and I’m pretty sure no one in attendance is either.

First off, Mickie points out Madison’s black glove that has proved fatal for the contender in recent weeks. Madison doesn’t see a problem with it and as soon as the official calls for the bell, she loads it up and goes right after Mickie’s face. But it isn’t going to happen that early. Mickie is quick to catch that arm and wrench it around, quick on the pain. This gives her just enough area to take Madison down not once, not twice but THRICE! A run for the ropes doesn’t always make it nice.

Mickie goes for that fourth pop but Madison outsmarts her, shoving her through the ropes. The Virginia native rolls to the outside, down on the mat. Madison is quick to make her way down to Mickie’s level and goes for a wide left swing. WHACK! She misses and smacks that fist right into the ringpost. But does she show it? Of course not because apparently that glove is has all over protection. – insert eye roll here – Or we can just settled for a kick to the abdomen and a stiff shot. That works too, Mickie.

The challenger take sthis time to stay on the champion, working her over the floor until she goes face first into the steel steps. That’s gotta burn. The referee starts the count, slowly working his way to ten but only reaches a soft five before Mickie is back up. Remember kiddos, this is a Last Knockout Standing match. The rules are simple. The Knockout who can beat her opponent to the point of no return will win. Mickie manages back up on the apron and throws a few shoulder blocks into Madison’s midsection, then pulls a quick slide into the ring between the champ’s legs. Madison looks like she’s trying to load up that glove, still trying to use it at every turn but Mickie is too fired up. Even an attempt at the RayneDrop can’t keep Mickie down and she comes back, taking the champ down with a clothesline. Madison takes this time to roll to the outside, trying to walk away. Even after Mickie invites her back into the ring. If only Mickie would remember that this is a Last Knockout Standing match(…i repeat), she might think about going after..oh there she goes!

She spins Madison around and with a stiff shot, sends her down on the ramp. Ouch. Or so you would think. Mickie goes for the glove, trying to rip it off but Madison is quick to get back on her feet, easily recovered. She nails Mickie on the back with that gloved hand, using it as a club. Another pair of clubs and into the barricade goes the spine of Mickie James. Give it another spin around and Madison slams her into the side of the ring. Let’s hope Mickie is still into yoga. Madison yells for the referee to start counting and he does, just as she slides into the ring. Mickie is down on the floor but manages to her feet before he can reach a six count. This prompts Madison to come back down but what does she receive for her efforts? A nice trip headfirst into the ringpost. Now she’s in pain and the referee starts another count. I think he’s confused as to what he’s doing.

Mickie rolls Madison back into the ring and they scuffle for a moment until Madison can finally drop Mickie onto that knee. She is down and the official starts yet another count. This time, he reaches an eight count but Mickie is barely able to stand on her feet. She’s wobbly and Madison looks to take advantage, but instead, she ends up on the apron and then on the floor. Cue another count. He reaches the six mark and THWACK! Mickie comes down off the apron with a rough Lou Thesz Press on top of Madison Rayne. Another count but Mickie is up, reaching for that glove, still trying to rip it off. And here is where it gets fuzzy.

Cue random reason for both women crawling under the ring to the other side.

Madison is out first and she swings at Mickie when she comes out, banging that loaded glove agains the steel steps. This gives Mickie time for a nice heel/bicycle kick combination and Madison is down for the count. However, confused about the rules herself, Mickie pulls Madison up from the count and rolls her in the ring, going to the top rope. To be honest, this is starting to confuse me. Nonetheless, Mickie goes up but Madison is on her feet and she shoves Mickie back down to the floor. Not an easy fall considering Mickie hit that apron hard on her way down. So graceful. The referee starts his count and it seems a little faster than the others, considering he reaches nine in record time. But Mickie isn’t going to be held down, no sir. In her glossy state, she barely manages to her feet before the ten can be announced. Now I’m getting the hang of it.

Madison screams at Mickie from the other side of the ring, loading up that glove one last time. She swings but Mickie catches her, dropping her elbow on the top rope. This sends Madison reeling across the ring and Mickie pops back up on the top rope. And down she comes with another Lou Thesz Press onto Madison, fired up and ready to go! Madison wobbles and gets to her feet only to be taken down with a spin kick. And here comes the retribution! Mickie finally rips that glove off of Madison’s hand and applies it to her own, practically begging for her foe to get up. Again, confusion. The object is to have your opponent counted down for the ten, not encourage them to get up just so you can knock them down again. Who knows. Maybe Tara can explain the rules to us..

Because there she is, in all her interfering, elbow brace bearing glory! She runs down and jumps on the apron, swinging at Mickie who flips her over onto her backside. I suppose a little retribution is better than none. A stiff shot with that glove to Tara’s jaw sends her flat on her back, which causes just enough of a distraction on part of the referee. He rolls her out of the ring while, behind his back, Madison wields a pair of brass knuckles straight from her boot. She hauls off and WHAM! down goes Mickie and in go the brass knucks to the knickers. Again, I find myself confused because Madison goes for a pin attempt. No. No. No. But thankfully, the referee knows what he’s doing and he starts the count. All the way to ten he goes and very much thanks to the distraction from Tara, Madison Rayne retains her coveted title.

The winner of this match and STILL TNA Knockouts Champion: Madison Rayne

Thoughts: Okay. I tried my best to make this write-up worthy of everyone’s time because I certainly do not think this match was. It was horrible. I expected so much more out of a stipulation such as Last Knockout Standing. TNA had such an opportunity to make this match incredible and they bombed it. As for Madison and Mickie, where are your street clothes? What about taped fists and weapons? Sure, you used the glove and brass knuckles but seriously?! You could have done so much better and so much more with this. I am really disappointed and from what I’ve heard so far from friends, so were they. I had hoped for a new champion which could lead to new feuds but it doesn’t look like it. I did read where someone said this could lead to a Championship versus Career match so who knows. Very lackluster, in my opinion.