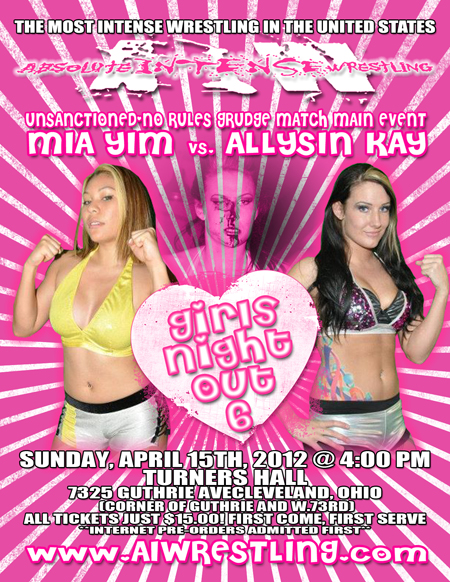 Details for AIW Girls Night Out 6 this weekend:

[notice]On Sunday April 15th, just a week after the Straight Outta Compton show, Absolute Intense Wrestling presents another extraordinary event with the 6th edition of Girls Night Out. Show has a special 4pm belltime, and once again takes place at the infamous Turners Hall, located on 7325 Guthrie Ave in Cleveland, OH. No doubt is this the biggest and most stacked edition of Girls Night Out yet. AIW has proven time and time that we showcase only the best womens professional wrestling in the United States, and this time there will be 10 womens matches in all. The line-up for this show is as follows:

Unsanctioned, No-Rules Grudge Match for the vacated AIW Women’s Championship- Mia Yim vs. Allysin Kay: To say this is a grudge match is an understatement, as these two females have absolutely hated each other since the previous Girls Night Out event. At that event, Flexor Industries had turned their backs on Yim, with Kay being the one giving her the most out of that attack. Later that night, Yim got revenge in a big way in an impromptu match, as she severely broke Kay’s nose which required a trip to a local hospital later that night. Ever since that night, these two have done nothing but verbally attack each other over the internet. The state of Ohio Athletic Commission are even afraid what they might do to each other in the ring. With that being said, AIW has agreed to let them fight it out in the ring, with the stipulation being the match will not be officially sanctioned by AIW, and there will not be any rules.

In other big news, Mickie Knuckles has declared she has had to vacate her AIW womens championship due to pregnancy. In doing so, she petitioned to AIW to make the match between Yim and Kay for the vacated title, as Mickie feels Yim and Kay are both worthy at being called the AIW womens champion. With so much on the line in this match, and so much hatred brewing between these two ladies, no one can possibly predict what can and will happen once these two step foot in the ring again on April 15th.

Special Attraction- Hailey Hatred vs. Jenny Rose: Hailey Hatred, the 1st ever AIW womens champion, makes her long-awaited return to Girls Night Out, as she takes on the debuting Jenny Rose. Last seen in AIW, Hailey successfully defended three of her Japanese womens titles against Cherry Bomb at “They Live”, and will be looking to continue her winning ways in AIW. Rose, formerly known as the masked Jamilia Craft, has made her name all over the country and in Japan. Like all newcomers making their debuts in AIW, Rose is looking to make a big impact, and could make no bigger impact then by defeating the first ever AIW womens champion

The Queen vs. The Rookie- Sara Del Ray vs. Veda Scott: Last seen at Girls Night Out 5, The “Queen of Wrestling” Sara Del Ray came up short in capturing the AIW womens title from Mickie Knuckles, but this time it seems she has an easier task in the rookie Veda Scott……or does she? She may not look or seem like it in the ring, but Veda Scott is still relatively new to competing inside a wrestling ring, as shes only been wrestling for a little over a year now, but even so she has made a name for herself not only in AIW, but in all of independent wrestling. Now the Ring of Honor student will have her biggest challenge to date as she takes on Sara Del Ray. Unlike Sara, Scott was able to pick up at a win at the last Girls Night Out event against Kimber Lee, so Scott has some momentum going into Girls Night Out 6. Both ladies have something to prove in this match, but only one can come out the victor.

Gutting for Revenge- Cherry Bomb vs. Sassy Stephie: Back at Girls Night Out 5, Cherry Bomb was scheduled to compete one on one against Allysin Kay in a number one contenders match for the womens title. However, Cherry could not make the event, as later on during the show Kay came out and proclaimed she along with the rest of Flexor Industries had Cherry blocked from coming into the country from Canada for her scheduled match. Cherry is sure none too pleased by those actions, and will be looking to exact some sort of revenge on Flexor Industries, but with Kay already scheduled for a match, she will have to stick with facing the newest member of Flexor’s stable in Sassy Stephie. With this being her first match being aligned with Flexor, Stephie will have to prove she is worthy enough to remain with Flexor, but to do that, she will have to go through Cherry Bomb

Dynamite Returns- Jennifer Blake vs. Kimber Lee: When AIW first formed its womens division, one of the first female competitors AIW wanted to have on its roster was “Girl Dynamite” Jennifer Blake. Blake, a canadian-born competitor, has been in the business for almost 5 years now and is currently one half of the AAA World Mixed Tag Team Champion. Blake competed at the first Girls Night Out event, having competed in an eight-woman tournament to crown the first womens champion of AIW. She was able to make it to the semi-finals that night, but came up short in being defeated by the eventual tournament winner Hailey Hatred. Now returning to AIW almost 3 years later, she faces Kimber Lee, the CZW trainee who impressed AIW officials and fans at Girls Night Out 5, however was not able to get a win. Lee will surely be looking to pick up her first victory in AIW on April 15th, but in order to do so, she will have to get through Girl Dynamite herself.

Newcomers Collide #1- Taeler Hendrix vs. Annie Social: Taeler Hendrix, current OVW womens champion, has been itching to make her debut in AIW for quite some time, and will not get her chance to do so when she debuts at Girls Night Out 6. Her opponent is Annie Social, who is also making her debut at Girls Night Out. Social, who is a veteran of sorts, having competed in the ring for over 10 years, has made a name for herself wherever she has competed, and is looking to do the same on April 15th when she steps foot into the AIW ring. Only one of these newcomers can win the match, but will both make an impact on the AIW audience?

Newcomers Collide #2- Taylor Made vs. Melanie Cruise: Two more female competitors debut at Girls Night Out 6, however they are certainly no strangers to each other. Melanie Cruise, a Chicago-based competitor of 4 years now, takes on Taylor Made, also from the Illinois area and like Cruise has competed in Shimmer. These two ladies have fought each other many of times in many promotions and will now take their rivalry to Cleveland, OH as they fight inside an AIW ring on April 15th.

Other matches scheduled for Girls Night Out 6 include:

Tickets for this event are only $15 each and are first come, first serve. AIWrestling.com has more information on events as well as ticket sales. Be there as AIW once again makes history in Independent Professional Wrestling[/notice]