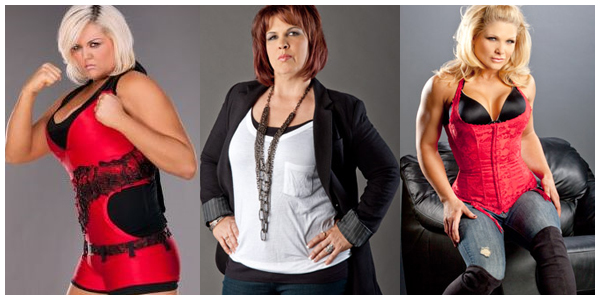 Former NXT Rookie Diva, Aloisia, has posted a new blog at her official website, blasting (in character) her would-be NXT Pro, Vickie Guerrero and even calling out Beth Phoenix. Read an excerpt below:

To say that this has been a rough week would be a huge understatement. First, my “no-talent” NXT Pro Vickie Guerrero fires me from NXT because she can’t deal with the fact that I’m twice her size and not the least bit intimidated by her. I mean, did you see how she humiliated Kaitlyn on national TV last night? This is nothing against Kaitlyn…I think she’s adorable, but EXCUSE ME…if Vickie had pulled that stunt with me, she would have found herself flat on her back, under my boot. Kaitlyn, you deserve better than some washed up middle-aged “Pro” who’s been resting on her laurels for about the past 20 years or so.

Next, I find out that maybe the “real” reason I was fired was because of some ridiculous lingerie photo shoot I did when I was 18. Um, EXCUSE ME, but if what I did was so unforgivable then can someone please explain why my “favorite” person, VG, has a (censored) nude photo shoot posted on the WWE.com website?

Speaking on Beth Phoenix, who made a comment about her on Twitter last week, Aloisia writes: “And Beth Phoenix, honey…I’ve got you in my sights as well. Every time you look in your rear view mirror, that’s me you see coming up behind you.”

Well, she may have been unceremoniously cut from the main roster, but Aloisia is certainly keeping the buzz alive.