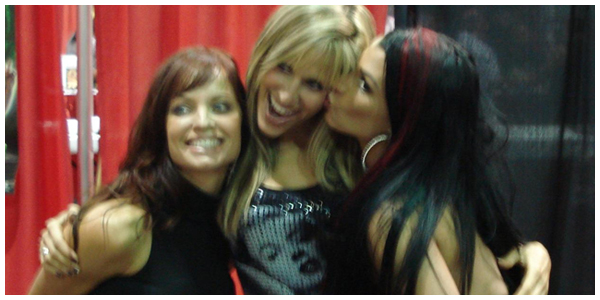 Another Diva Dirt reader who attended this past weekend’s Chicago Wizard World has sent in his report and pictures to share with all of you. Laren writes:

Lita was friendly but more reserved than many people might realize. This is not a bad thing at all however. She was quite pleasant and looked great.

Christy Hemme was quite personable. I had a nice talk with her while getting a couple of autographs. She also stepped over to spend time at Lisa Marie’s booth a lot (as the two were located right next to one another). She was lively and had a good sense of humor.

Jackie Haas is one of the prettiest and sweetest people I’ve ever met. Words don’t even begin to describe just how engaging and nice she is to everyone. An utter sweetheart. Probably I would have rated meeting her as the highlight of the weekend, if not for…

Lisa Marie Varon is without a doubt the coolest human being ever. I spent pretty much the entire Friday at her table and she could not have been more friendly, engaging, funny or drop dead gorgeous. (TV does not do her justice). She had many great anecdotes to tell and had nothing but positive things to say about various people she’s worked with. She was also quite popular with the other wrestling personalities at the show, as it seemed like everyone stepped away from their own tables to stop by hers at one point or another on Friday. It was also nice to see that she had a lot of genuine fun being at the convention, especially since you’d figure someone who does them regularly would be jaded with the experience. Not her…she was downright enthusiastic about all the fans in costumes and other goings on.

Check out his pictures below: