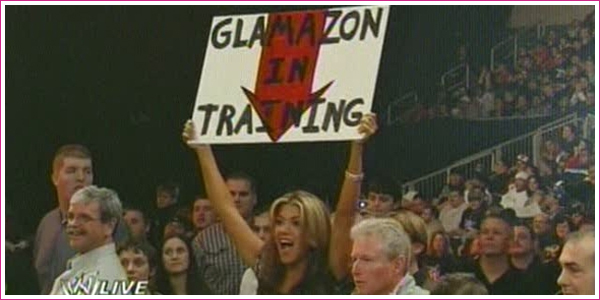 WWE sure is shaking up the women’s division of late. Add Milena Roucka to the slate of returning Divas we’ve seen or read about in the last two weeks.

Previously on “Returning Divas”, Alicia Fox, the former SmackDown wedding planner returned but this time to ECW as a glorified Nitro Girl/manager to new talent DJ Gabriel. Last night, Melina made her much-awaited return from injury on Raw. And Gail Kim‘s WWE re-debut is imminent.

Roucka appeared on last night’s Raw as a fan in the front row holding a, “Glamazon in Training” sign. It was reported yesterday that Roucka had been called upon to travel with the main roster. Roucka was part of the 2006 Diva Search (won by Layla) and then signed a developmental deal and is currently with FCW.

To be honest, I’m not 100% sure if this is the start of an angle or if it was a one-time thing. Placing her in the audience is hardly substantial enough to say she’s ‘debuted’, it may just be they put her in the audience for this week only. Why? I couldn’t tell you, WWE’s Creative Team is perplexing. Or could it be that Roucka will eventually join Raw? Some of the tabloid-style news sites are speculating Roucka will play an obsessed fan of Beth Phoenix. Interestingly, Roucka earlier this year appeared on FCW professing her love for Santino – is this a continuation of that storyline? We’ll see.