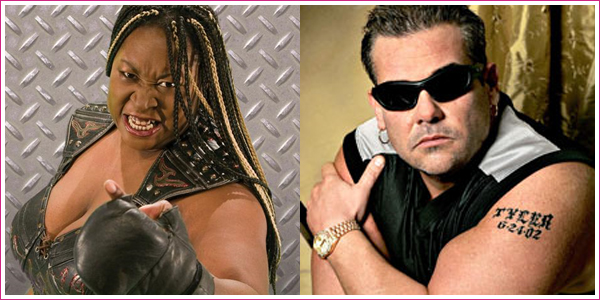 Controversial radio host and TNA personality, Bubba the Love Sponge revealed on his radio show this morning that Knockout Awesome Kong punched him in the face after his disgusting comments about the tragedy in Haiti. The incident took place at yesterday’s Impact taping and resulted in Bubba being sent home.

As has been well documented here at Diva Dirt, Kong has been a driving force in the wrestling community in raising funds for Haiti.

She was wearing wrestling gear, and she came in on me and sucker punched me right on my left cheek, and I was like, what’s going on… then she came out me again, hit me again in the mouth, and she goes, ‘This if for Haiti! This is for Haiti!’ and I’m like ‘What is going on?’ Finally I put my left hand out and push her away from me, and she comes at me again and I just cover up, because I cannot fight back on a woman. Not only will I be fired from TNA, which I probably am, but my radio career is gone if I take a woman out!

We’ve been working with Kong over the weekend and I can’t tell you enough just how amazing and kind-hearted this woman is, she worked tirelessly for days to put Wrestlers 4 Haiti together and then someone in her own company shits all over it. I don’t condone ‘real’ violence but I can’t say I don’t blame her knowing what she’s done for Haiti on top of continuing her busy wrestling schedule with TNA house shows.

UPDATE: It appears that new TNA head honcho [kinda], Hulk Hogan was on the show with Bubba and had the following to say — suggesting that some people backstage thought Kong should have been fired immediately after the incident:

I tell you what, after what happened, if you had clocked her you’d have got away with it. What nobody knows, and this is the real truth, that there were certain people there… she should get off the property, she should be fired immediately, that’s it. It was so violent. You could have actually lost an eye, you could have had your teeth knocked out. But, to give you your creedo, you are the one who said not to fire her.

UPDATE #2: ProWrestling.net is reporting that Kong, as well as Bubba, was sent home from the taping yesterday. TNA had pencilled in a six Knockout tag team match between Kong, Hamada and Tara vs The Beautiful People but the match was later scrapped and they filmed a different match instead. For spoilers for the show click here.

We have nothing but the utmost love and respect for Kong and hope this matter is resolved quickly so she can going back to what she does best, entertaining fans.