Backlash 2009: Santina vs. Beth Continues (w/ a Cameo From Khali) 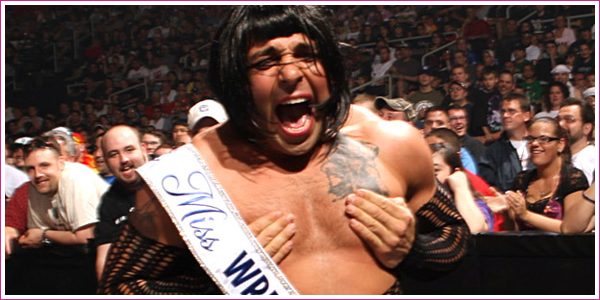 Blind yet? Well, I certainly got your attention with a well-selected photo, didn’t I? As you can plainly see, though there were no Diva matches on the card, Backlash still delivered some Diva action. Questionably pointless action, but action nonetheless. Seeing as how this probably doesn’t merit an entire Redux, we’ll provide you with the results and allow you to discuss it yourselves. Check out the results below:

Backstage, Beth Phoenix and Rosa approached Santino, who pretended to be on the phone with Santina. Beth tried to get Santino to give him his charade, but he wouldn’t do it, saying Beth was just jealous. He then tried to get Beth to kiss the Great Khali tonight. Beth said she wasn’t kissing Khali, and she wasn’t kissing Santino anymore either. Phoenix walked off, and Santino said he faked “you know what” in bed with her.

From there, we move on to the “main event” so to speak, including in impromptu match between Beth Phoenix and Santina:

Ranjin Singh and The Great Khali came out for the Kiss Cam, and called out Santina Marella. “She” came out and said she would love to kiss Khali, but she isn’t what she “appears” to be. Singh said she needed to explain herself. Santina said she is not “a single girl” and said she was in love with someone else. Khali, through Singh, wanted to know who it is. Santina said it’s JR, and that Ross had been “courting” her since Wrestlemania. Santina expressed her love for Jim Ross. Ross noted he is happily married. Singh said Khali understands and that all he wanted to see was Santina kiss JR right now. Ross said “that isn’t going to happen” while Lawler and Cole were cutting jokes. Ross asked Cole who was feeding him his lines. Santina then said he, er she, felt faint. Beth Phoenix and Rosa came out, and Phoenix said she is sick of this and wanted a match for the Miss Wrestlemania crown right now. Khali was angry at the interruption, and Phoenix tried to explain to him that Santina was a man. Phoenix told Khali he had rocks in his head, assumed all women in “Punjabi” were ugly if he likes Santina, and that Khali must be an idiot. Khali bopped Beth in the head, then shoved her to the mat. Santina told the referee to ring the bell, shoved Rosa out of the way, then covered Phoenix for the pin. Khali approached Santina, who tried to run away, and Khali pulled off her bra. Santina ran off, covering her/his chest, while Khali and Singh celebrated with the bra.

Did you happen to catch the show? What did you think? Did you enjoy this lame excuse for more Santina fuckery? Discuss!

EDIT: And for your viewing pleasure, here’s footage from the “Kiss Cam” segment: