Bayley on Winning the NXT Women’s Championship: “All I Could Do Was Cry” 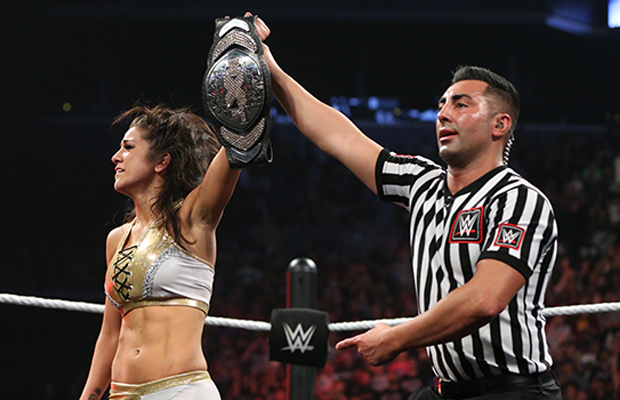 New NXT Women’s Champion Bayley recently spoke to WWE.com about her monumental victory at NXT TakeOver: Brooklyn, sharing her emotional experience before, during and after the big match.

Her reaction upon winning the title: “All I could do was cry. I was crying because of everything I’ve been through to get there, how I got there, who I was in there with, how many people were there with us, how important it was and because I was literally living the dream.”

The importance of proving herself: “In the past two championship matches I felt like I may have let some fans down who believed in me because I just couldn’t get it done. I felt like my family just felt sorry for me because I couldn’t get the big one. I needed to prove to them and to myself that I could accomplish my dreams.”

Her pre-match jitters: “I was confident before I walked out there but so nervous that I was sick to my stomach. I couldn’t even watch the promo package leading into the match because I was so emotional. It was one of the most overwhelming moments in my life. It may be the most magical moment I’ll ever have in wrestling or life. Hearing the crowd react like that was something I’ve never heard before. After the match, Vince McMahon shook both our hands. Everyone was giving us hugs. Triple H, Stephanie McMahon and even my favorite Diva, Lita, were there to say how proud they were of us. It was just amazing.”

Her message for the WWE Universe: “I want every single person out there with a dream, no matter what it is, to know that it is possible. And it’s possible to do it your way, the way you believe in. Nobody can deny your heart. It sounds so cheesy, but Sasha Banks and I had the same dream since we were 10 years old, and wrestling brought us together to prove that anything you want to do is within reach! And it can be special. You just have to believe in yourself.”

You can read the full interview on WWE.com.