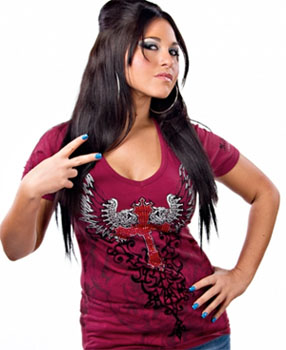 Now former TNA Knockout, Cookie aka Becky Bayless, has opened up about her departure from the company just 72 hours later in an interview with our friends at IWantWrestling.com.

Talking to David Lagana, Becky says: “This last week, my contract expired with TNA, it didn’t get renewed, and that’s about it.”

On receiving the call that her contract wouldn’t be renewed, Becky says: “At first it took me off guard. I had had talks with the office, obviously, because I was aware that my contract was coming up and I was under the impression that I would be signing a new contract. [I] actually found out a few days after my contract expired [that they wouldn’t be renewing it], so I was a little taken off guard.”

“But in the 48 hours following, I reached out to some friends of mine, a lot of friends reached out to me and it really opened my eyes that it’s not a loss as much as it is closing one chapter and opening a whole new one.”

Becky adds: “I’ve just been exploring all kinds of other opportunities that have been popping up. A few of them are very exciting. As you well know in wrestling, nothing’s for sure until you walk through the curtain so till then everything’s just talk but I definitely have a lot that I’m excited about and working on right now. It’s also been very nice [to have] the numbers of people that have reached out to me.”

Thoughts: It’s kind of baffling to me that TNA didn’t renew Becky’s contract when Cookie was such a great character and even if the Robbie E pairing ran its course, she could’ve been assigned to be a talker for another wrestler or even a Knockout. However, with so many girls returning to the company lately i.e. ODB, Jackie and Traci, I guess money is tight also. It sounds like Becky has a lot coming up — including a return to WSU on November 19th — so she’s not exactly wallowing at home which is great to see.

You can listen to the full interview below. Becky talks about her run in TNA, working with Jersey Shore star Jwoww, what she thought of Snooki appearing at WrestleMania and more.