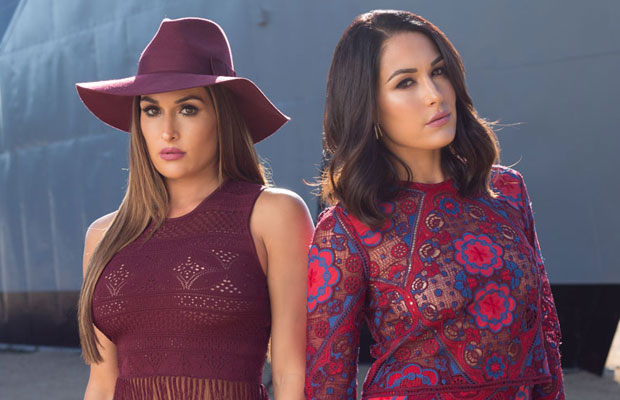 On the latest issue of Pacific San Diego magazine, WWE Superstars Nikki and Brie Bella discussed some hot topics (as well as delivering a stellar photoshoot). In the interview the former Divas champions discussed their upcoming reality show, Nikki’s injury and more. Here are the highlights:

On what to expect on Total Bellas: “People got a taste of our family in ‘Total Divas,’ and now it’s like, ‘Let’s throw us all in a house and see what happens.’ That’s what we wanted to give the fans.”

On the difference between Total Divas: “I thought this would be more fun with the family (than with the Total Divas). With your family, you can bicker and fight, and it’s fine. We had a blast.”

“It’s crazy, I thought (‘Total Bellas’) would be exactly like doing ‘Divas,’ but it was all us all the time.”

On Nikki living in San Diego: “I’ve told John we really have to live here. I do a lot of traveling, and I really feel like San Diego is the most beautiful city.”

On empowerment: “A lot of women are confused about what empowerment is. It’s about how brave you are inside, your courage, your confidence and what you stand for.”

On Nikki’s injury: “I feel so good now, but I never want to get neck surgery again. Being in a neck brace 24/7 was so aggravating and so uncomfortable. It made the days seem so slow. It was a really difficult time.”

Pacific San Diego magazine says that Total Bellas will include “juicy drama as Brie and her husband, wrestler Daniel Bryan, move in with Nikki and her boyfriend, wrestler John Cena, to help Nikki recover from neck surgery. Look for emotional meltdowns as Bryan attempts to cope with retirement; the twins’ mother, Kathy Colace, prepares for her marriage to WWE producer John “Johnny Ace” Laurinaitis; and the more spontaneous Brie and Bryan wrestle with Cena’s many in-house rules – starting with a morning routine that went over like a lead pancake.”

Are you excited for Total Bellas? Let us know your views in the comments below!